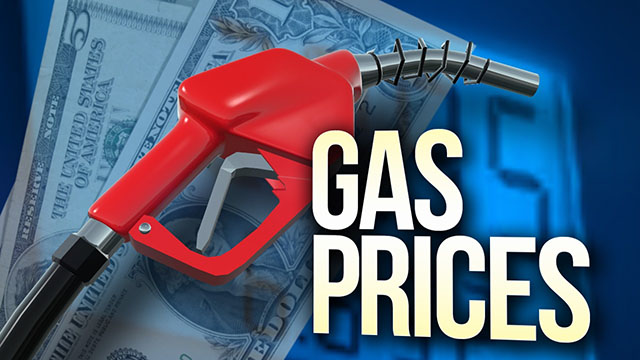 Republicans are seizing on rising gas prices as they look to counter Democrats’ messaging on the economy ahead of the 2022 midterm elections.
The rise in gasoline and oil prices has put pressure on the Democratic Party as it banks on an economic recovery to help maintain its fragile majority in Congress. Now, Republicans are tying the surging prices to Democrats' policy agenda in an effort to sell their message of a mounting inflation crisis, especially as the U.S. economy begins to rebound on other fronts.
Over the Fourth of July weekend, the National Republican Congressional Committee (NRCC) launched a raft of digital ads targeting vulnerable House Democrats over rising prices – including the cost of gas.
“Burgers, buns, propane, gas. This year, your Fourth of July Is more expensive, because Democrats' harmful economic policies are making everyday goods cost more,” a narrator says in the 15-second ad spot, which goes after nearly a dozen Democratic incumbents in competitive districts.
The strategy isn’t an entirely new one. Democrats seized on the issue during the 2008 presidential contest when gas prices jumped to more than $4 per gallon. Former President Barack Obama went on to win that race.
Alfredo Ortiz, the president and CEO of the conservative nonprofit the Job Creators Network, likened inflation to a “tax on the middle class” and compared President Biden to former President Jimmy Carter, whose time in office was defined in part by fuel shortages and stagflation.
"When Joe Biden looks in the mirror, he has to see Jimmy Carter, because Biden is Jimmy Carter 2.0,” Ortiz said. “With Biden spending trillions of dollars and planning to spend trillions more, all of our inflationary fears are coming true.”
“When inflation soared under Jimmy Carter, he lost in a landslide to Ronald Reagan and Republicans took back the Senate. Democrats in 2022 will find it equally hard to defend their inflationary record, and Republicans will make gains.”
The current average price of gas – $3.141 per gallon, as of Thursday – hasn’t risen to 2008 levels. But the national average is still up about 40 percent since the beginning of the year, and the American Automobile Association (AAA) has warned that it expects gas prices to increase another 10 to 20 cents through the end of August.
The surging prices and Republicans’ increasing use of them as a talking point has gotten the attention of the White House, which sought this week to deflect blame for the rise and reassure Americans that the Biden administration is working to ensure that “Americans don’t bear a burden at the pump.”
“I think there sometimes is a misunderstanding of what causes gas prices to increase and so, to convey to the American people that we’re working on it and certainly the supply availability of oil has a huge impact,” White House press secretary Jen Psaki said during a press briefing on Tuesday.
Presidents have little control over gas prices. Experts say that part of the recent spike may be due to the fact that more Americans are traveling as COVID-19-related restrictions are lifted and the broader economy reemerges from its pandemic-era slump.
Also contributing to the rise in gas prices is the recent failure by oil-rich OPEC nations to reach an agreement on production. Psaki said this week that the Biden administration is “directly communicating” with OPEC members in an effort to reach a deal to increase output.
Gas prices fell below $2 per gallon in April 2020 as lockdowns and public health restrictions took effect and Americans began staying in their homes. But they’ve climbed back up since then, including while Trump was still in the White House.
Still, Republicans are leaning into the recent surge in gas prices, using them as a cudgel to attack Biden and congressional Democrats on their energy and climate policies, all the while arguing that Trump’s aggressive support for the fossil fuel industry helped keep costs low.
“As the White House deflects blame, Americans are facing gas prices at a seven-year high under Biden,” Republican National Committee chair Ronna McDaniel tweeted.
“We saw historically low prices for years, in part because the Trump administration's policy of ‘energy dominance.’ Leaning on the full power of America's energy might,” Dan Eberhart, a Republican donor, tweeted on Wednesday. “Joe Biden has cut back on that, and we're seeing the results of it at the pump.”
Rep. Tom Emmer (R-Minn.), the chair of the NRCC, blamed government spending in recent months for a broader surge in the cost of goods and services.
“Americans are being forced to pay more to celebrate the Fourth of July this year because Democrats’ wasteful spending has caused inflation to skyrocket,” Emmer said in a statement. “Voters will hold Democrats accountable for making everyday goods and services more expensive.”
Polling has shown broad public support for the Democrats’ pandemic-related stimulus and spending measures, particularly the $1.9 trillion American Rescue Plan approved by Congress earlier this year.
But a recent Fox News poll also found that concerns about inflation are on the rise, as well. Eighty-three percent of respondents said they are worried about inflation, topping the list of economic concerns for voters. Meanwhile, 68 percent said that rising gas prices have become a hardship.
One GOP operative boasted that the recent focus on gas prices – and the broader implications of inflation – had managed to put Democrats on the defensive at a time when they would rather be celebrating the broader economic recovery from the depths of the coronavirus pandemic.
But the operative also acknowledged that fuel prices could very well stabilize in the 16 months leading up to the 2022 midterm elections. And with many car manufacturers and Americans looking increasingly toward clean energy, gas prices may not carry the same political weight they have in past decades.
“Clearly the Democrats know it’s a problem for them if the White House is out there addressing it, and it’s much harder for them to make their case than it is for us,” the operative said. “But I mean, is gas going to be our silver bullet? I just don’t know.”
National