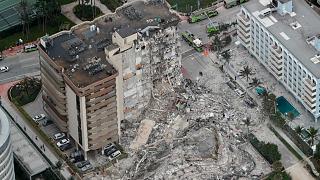 Since Oct. 13, 2020, the owners and management of the Champlain South Towers South in Miami, Florida, have known of concrete deterioration and reinforcement corrosion in the pool area, which had gotten to the point that it could not be repaired.
The sad state of conditions concerned engineering firm Morabito Consultants because it was worried the rotten building “might affect the stability of nearby areas,” USA Today first reported. The outlet obtained an exclusive video of corroded pipes with water damage in the garage and buckets placed underneath them to capture leaking water.
In a nine-page report, workers from the Concrete Protection and Restoration said they found deep deterioration of concrete near the pool area and that restoration and repair were not possible, because removing the concrete from the pool "could affect the stability of the remaining adjacent concrete constructions."
A letter shared by Jean Wodnicki, the condo association board’s president, with residents on April 9 reported that fixing the building’s basement garage and roof would cost $16.2 million, but the association could only cover $707,003 of repairs.
It is still unclear what exactly caused the building to collapse at 1 a.m. on _date_?, but information obtained  by USA Today revealed that the Champlain South Towers South building was in serious need of repair. The death toll, according to USA Today, is now 18, with 150 people still missing.
National