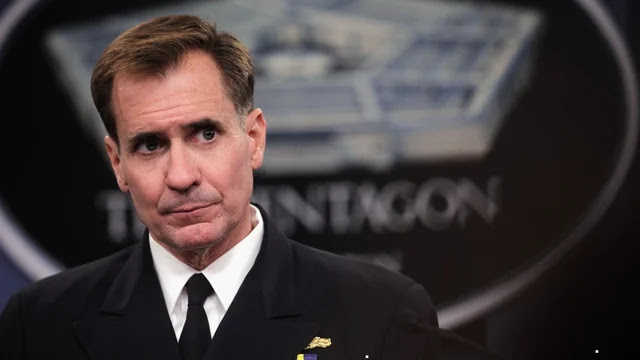 The Pentagon’s top spokesperson on Friday acknowledged a “deteriorating security situation” in Afghanistan amid the Taliban sweeping through the north and claiming to now control a large majority of the country.
“What we have seen is a deteriorating security situation on the ground, no question about that, that the Taliban continues to take district centers,” Pentagon press secretary John Kirby said in an interview with CNN on Friday morning. “We are seeing them continue to advance on district centers around the country, and it is concerning.”
Kirby’s comment came after the Taliban claimed to now control 85 percent of Afghanistan.
The assertion was made by a Taliban negotiator during a news conference in Moscow, where a senior Taliban delegation was visiting this week to offer reassurances the insurgents’ recent gains will not threaten Russia or its Central Asian allies.
Kirby told CNN he was “not in a position to quantify or to validate” the Taliban’s claims on how much territory it controls.
“Claiming territory or claiming ground doesn't mean you can sustain that or keep it over time,” Kirby added.
According to Long War Journal, which is maintained by Bill Roggio of the Foundation for Defense of Democracies, the Taliban controlled 204 of 398 districts, or just over half, as of Monday. The Taliban is contesting another 124 districts, according to the tracker.
Over the last week, the Taliban has been consolidating gains in the north, including taking control of border crossing with Tajikistan, Uzbekistan, Iran and Turkmenistan. Amid the Taliban onslaught, hundreds of Afghan soldiers have reportedly fled into those neighboring countries.
On Thursday, as headlines about Taliban gains racked up and the United States nears its final exit from Afghanistan after 20 years, President Biden forcefully defended his decision to withdraw.
In an address from the East Room, Biden rejected assessments that it’s “inevitable” the Taliban take over after the withdrawal and said it is now up to the Afghans to defend their country.
On Friday, Kirby backed up Biden.
“Nobody can say with certainty, but I think the president's right that it's not a foregone conclusion, and nobody should think it's a foregone conclusion, that the Taliban are just going to swiftly take over the whole country,” Kirby said on CNN. “It doesn't have to be that way.”
He also reiterated that the United States will continue to support Afghan forces financially, as well as helping maintain Afghan aircraft from outside the country. But he also echoed Biden in saying it is time for the Afghan forces to step up.
“We're giving them another 30-plus Black Hawk helicopters here, two coming this month, as well as other strike aircraft. They've got modern weaponry. They've had training and the ability to be in the field with American forces much over the last 20 years,” Kirby said. “They've got the capacity. They've got the capability. Now it's time to have that will.”
World