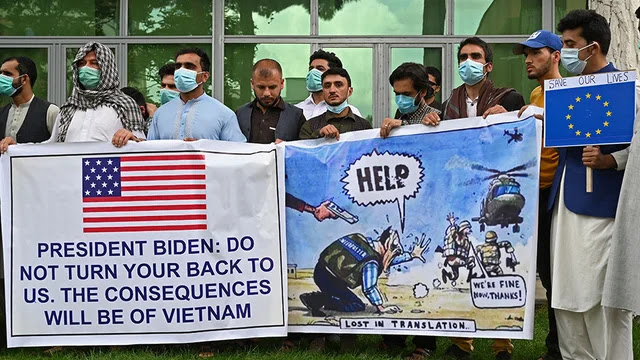 The Pentagon is working to identify possible locations outside of Afghanistan it can move thousands of Afghan translators while they wait safely for visas to enter the United States.
President Biden on Thursday said the United States would begin evacuating Afghans who helped U.S. troops during the war, along with their families, as soon as this month.
But details of where they will go and what the evacuation process will look like have been few and far between, with Biden only saying that relocation flights will begin later this month to U.S. facilities outside the continental United States or in third-party countries.
“Our message to those women and men is clear: There is a home for you in the United States, if you so choose,” Biden said. “We will stand with you, just as you stood with us.”
The White House has not disclosed specifically where individuals will be transferred, with press secretary Jen Psaki earlier Thursday citing “security reasons” in not disclosing locations.
Lawmakers and advocates for the Afghans have urged the administration to house them on the U.S. territory of Guam. Reuters reported last week that the United States is negotiating with Kazakhstan, Uzbekistan and Tajikistan to take in the refugees for the time being.
Later on Thursday, Pentagon press secretary John Kirby told reporters that “several” U.S. military installations overseas are being considered as well as facilities used by the U.S. in host nations.
“Our task in this interagency process is to look at our installations overseas and to recommend to [the State Department] and to [the Department of Homeland Security] what installations we think might fill the need,” Kirby said.
Kirby also said evacuations could begin in the next three weeks and could include flights on State Department-chartered or commercial aircraft.
Biden in April ordered a full withdrawal of U.S. troops from Afghanistan, setting the stage for the end of America’s longest war by the 20th anniversary of the 9/11 terrorist attacks that originally sparked the U.S. invasion.
But as the U.S. withdrawal has neared its end, Taliban gains have accelerated, prompting more urgent warnings on the need to evacuate Afghans who served as interpreters, lawyers, contractors or otherwise helped U.S. troops during the war. The workers and their families are in danger of being attacked and killed by the Taliban as they wait for their Special Immigrant Visas to be approved.
Biden on Thursday said that his administration has sped up the process for approving the visas, with the government allowing roughly 2,500 since his inauguration. Of those, fewer than half have been accepted, he said.
He added that his administration is working with Congress to better streamline the approval process.
But even with the new efforts, more than 15,000 Afghan translators and their families are still waiting on their visas.
World