McConnell vows 'hell of a fight' over infrastructure plan 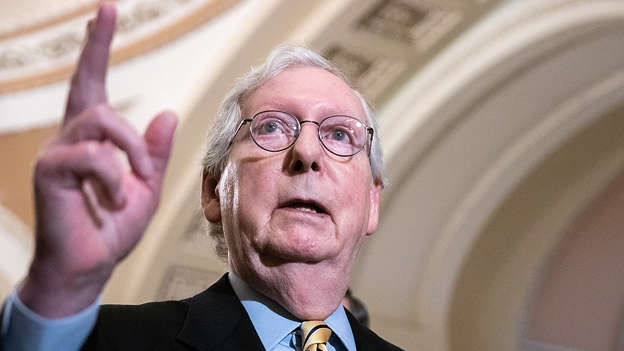 Senate GOP Leader Mitch McConnell (Ky.) vowed Tuesday that Republicans would wage a "hell of a fight" over attempts by Democrats to pass a sweeping multitrillion-dollar infrastructure plan along party lines.
McConnell, speaking at an event in Kentucky, predicted that there would be a "big argument" about Democrats' plan to use reconciliation, which allows them to bypass Republicans in the Senate, to pass large swaths of President Biden's jobs and families plan.
"The era of bipartisanship on this stuff is over. ... This is not going to be done on a bipartisan basis. This is going to be a hell of a fight over what this country ought to look like in the future and it's going to unfold here in the next few weeks. I don't think we've had a bigger difference of opinion between the two parties," McConnell said about the spending package.
"There is a process by which they could pass this without a single Republican. But we're going to make it hard for them. And there are a few Democrats left in rural American and some others who would like to be more in the political center who may find this offensive," McConnell added.
McConnell's remarks come as the Senate is in a two-week July 4 recess. Once it returns, Senate Majority Leader Charles Schumer (D-N.Y.) is wanting to vote on both a smaller, bipartisan infrastructure plan and the budget resolution, which allows Democrats to pass a second larger bill along party lines, before the Senate leaves in early August until September.
Democrats haven't yet agreed on how big to go on their Democratic-only bill, something they need to figure out before taking up the budget resolution that greenlights and includes instructions for reconciliation.
Democrats on the Senate Budget Committee, led by independent Sen. Bernie Sanders (Vt.), are talking throughout the two-week break to try to agree on the top-line figure. Sanders has floated going as high as $6 trillion, while moderate Democratic Sen. Joe Manchin (D-W.Va.), who is not on the panel, has suggested he could support around $2 trillion.
In order to move forward with a Democrat-only bill, Schumer needs total unity from his 50 members on both the budget resolution and the subsequent infrastructure bill.
Two of the biggest wild cards for the Senate, Manchin and Sen. Kyrsten Sinema (D-Ariz.), have suggested they are open to using reconciliation but haven't signed onto voting for a specific figure.
McConnell, speaking in Kentucky, called Biden a "nice guy" but that he hasn't "seen any evidence yet of moderation" from the administration.
"On things of this magnitude ... we're not going to have an agreement. We're going to have a big argument. ... There's no mandate to do this stuff. So we're there to argue about this and to hopefully in the end prevail," he said.
But McConnell also added that "we do not hate each other."
"We do a lot of things on a bipartisan basis. ... It's not that we have personality problems with each other, it's not that we have a lack of collegiality. On the things we can agree on, we do them," he said.
McConnell's comments come as the White House and a bipartisan group of senators are trying to build support for a roughly $1.2-trillion, eight-year infrastructure deal.
A group of senators, led by Sinema and Sen. Rob Portman (R-Ohio), joined Biden at the White House late last month to announce that they had reached a framework on a deal.
That was thrown into limbo after Biden suggested he wouldn't sign the bipartisan deal if it came to his desk without the larger, Democrat-only bill — remarks that he ultimately walked back amid intense GOP fury. Republicans have still signaled concerns that Democrats are trying to link the two bills in the House.
Some top Senate Democrats have also signaled skepticism about how the bipartisan deal would be paid for.
And while McConnell on Tuesday didn't rule out that the bipartisan bill could ultimately get the 60 votes needed to pass the Senate, he also said that Republicans needed more details.
"If that's credibly paid for, as opposed to adding it to the debt, I think there's a way forward on that portion of it," he said. "Maybe we'll get there."
National