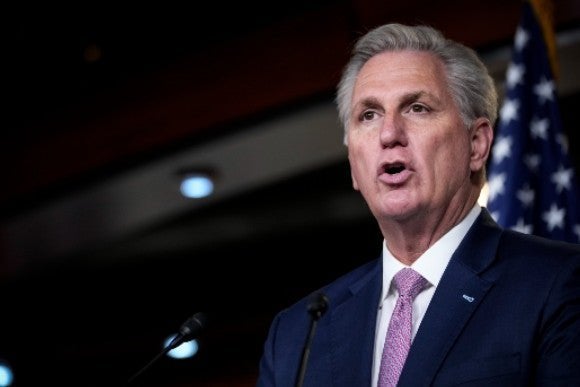 House Minority Leader Kevin McCarthy (R-Calif.) has decided not to participate in the select committee investigating the Jan. 6 riot on the Capitol, yanking all of his GOP picks in protest of Speaker Nancy Pelosi's (D-Calif.) decision to reject two top Republicans.
"Unless Speaker Pelosi reverses course and seats all five Republican nominees, Republicans will not be party to their sham process and will instead pursue our own investigation of the facts," he said in a statement.
A Pelosi spokesman quickly shot down the possibility that Pelosi might reverse course.
"No, you have our statement," said spokesman Drew Hammill.
McCarthy's remarkable announcement came less than an hour after Pelosi had announced her refusal to seat two of McCarthy's recommended choices for the select committee: Reps. Jim Jordan (R-Ohio) and Jim Banks (R-Ind.).
The special panel was created last month to investigate the Capitol siege, and Pelosi said the actions and statements of Jordan and Banks surrounding the violent episode threatened "the integrity of the investigation."
Pelosi said she would accept the other three Republicans recommended by McCarthy earlier in the week: Reps. Rodney Davis (Ill.), Kelly Armstrong (N.D.) and Troy Nehls (Texas). And in a phone call with McCarthy Wednesday morning, she said she invited the Republican leader to choose two alternatives to Jordan and Banks.
McCarthy wasted no time huddling with those lawmakers in the Capitol — a short meeting followed quickly by his announcement that Republicans will not engage in the select committee probe.
"This represents an egregious abuse of power and will irreparably damage this institution," he said in his statement. "Denying the voices of members who have served in the military and law enforcement, as well as leaders of standing committees, has made it undeniable that this panel has lost all legitimacy and credibility and shows the Speaker is more interested in playing politics than seeking the truth."
The exchange marked an extraordinary display of partisan hostility, even for a body that's practically defined by partisan theatrics. And it highlighted the degree of acrimony that still remains in the wake of the Jan. 6 Capitol attack, when a pro-Trump mob stormed the building in a failed effort to stop Congress from formalizing President Biden's election victory.
Pelosi's first choice of investigative strategies was to create an independent, bipartisan panel modeled on the 9/11 commission. That measure was co-authored by a Republican, Rep. John Katko (N.Y.), and passed the House with the support of 35 GOP lawmakers. But it was blocked by Republicans in the Senate, leading House Democrats to create the select committee in June.
McCarthy's decision not to participate means that the panel — designed to seat 13 lawmakers — will instead feature only the eight members appointed by Pelosi earlier in the month, including Reps. Bennie Thompson (D-Miss.), the chairman, and Liz Cheney (R-Wyo.), a Trump critic who will now be the only Republican lawmaker on the one-sided committee.
The panel's first hearing, scheduled for July 27, will feature testimony from four police officers who were injured during the Capitol attack.
National