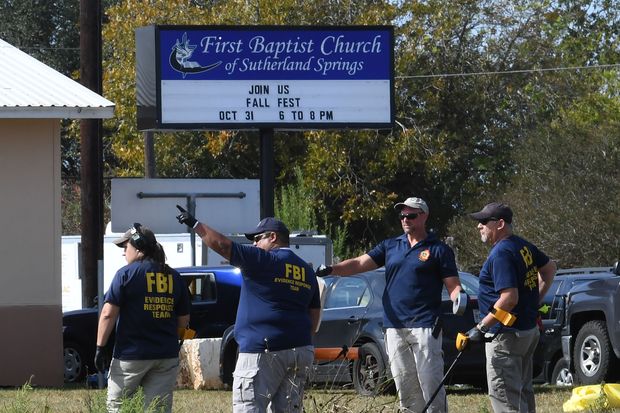 A federal judge on Tuesday ruled that the U.S. Air Force is mostly responsible for the 2017 mass shooting in Sutherland Springs, Texas, due to its failure to enter the gunman's criminal history into a federal background check database, which might have prevented him from purchasing firearms.
Devin Patrick Kelley killed 26 people and wounded 22 others when he opened fire at the First Baptist Church; he killed himself shortly after what was the deadliest mass shooting in Texas history.
In court documents filed on Tuesday, U.S. District Judge Xavier Rodriguez for the Western District of Texas ruled that Kelley was 40 percent responsible for the shooting while the U.S. government was 60 percent responsible.
In 2018, families of the shooting's victims filed a civil complaint against the Air Force, alleging negligence.
As the court documents state, Kelley made four separate firearm purchases in preparation for his attack. At the time of his purchases, background checks made through the National Instant Criminal Background Check System (NICS) showed that he was eligible to do so.
In 2012, however, he committed a disqualifying offense when he was convicted by a general court martial of domestic assault on his wife and child.
In 2020, the courts ruled that the government had failed to "exercise reasonable care" when it did not submit Kelley's fingerprints and conviction to the FBI, which runs the NICS, though it did not issue a judgment at that time.
"The trial conclusively established that no other individual — not even Kelley’s own parents or partners — knew as much as the United States about the violence that Devin Kelley had threatened to commit and was capable of committing," Rodriguez's ruling read.
"Moreover, the evidence shows that — had the Government done its job and properly reported Kelley’s information into the background check system — it is more likely than not that Kelley would have been deterred from carrying out the Church shooting."
The U.S. attorney's office representing the U.S. government in this case declined to comment.
Texas