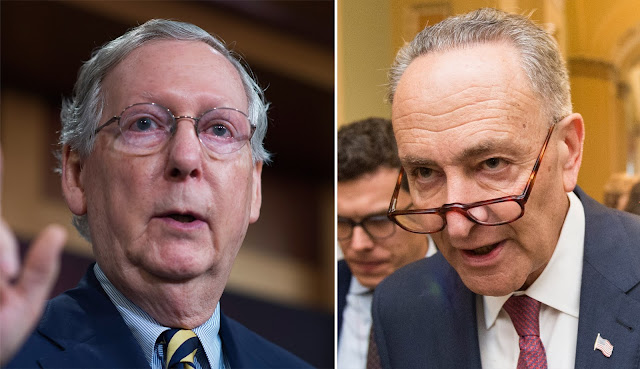 Republicans on Wednesday blocked the Senate from debating a bipartisan infrastructure proposal as negotiators say they are near finalizing their agreement.
The 49-51 vote fell short of the 60 needed to advance what is effectively stand-in legislation that senators will swap the bipartisan group’s text into once it is finished.
Senate Majority Leader Charles Schumer (D-N.Y.) changed his vote late in a procedural move that allows him to bring it back up for a second vote quickly.
Wednesday’s vote comes as the bipartisan group has been meeting around the clock, including late into Tuesday night and again Wednesday, to lock down their deal after announcing at the White House late last month with President Biden that they had agreed to a $1.2-trillion, eight-year framework.
But Democrats are feeling fierce pressure to start advancing President Biden’s sweeping spending bill, which they are pursuing on two tracks: the bipartisan talks and a separate $3.5 trillion plan that they will pass along party lines under reconciliation that will allow them to avoid a GOP filibuster on the second piece.
Schumer, speaking Wednesday ahead of the vote, pleaded with Republicans to let them start debate on the bipartisan track, arguing that he and Democrats didn’t view it as a hard deadline for the bipartisan talks.
“This vote is only the first step in the legislative process on the Senate floor. It is merely a vote about whether the Senate is ready to begin debating a bipartisan infrastructure bill. I have also been very clear about what this vote is not: This vote is not a deadline to have every final detail worked out. It is not an attempt to jam anyone,” Schumer said.
But that message — telegraphed this week during floor speeches and press conferences — was not enough to assuage the fears of Republicans, who made it clear that they would not give Democrats the 10 votes they needed to defeat the filibuster and advance toward debate on Wednesday.
"I think it's a meaningless exercise,” Sen. Susan Collins (R-Maine), a member of the bipartisan group, told reporters shortly before Wednesday’s vote.
Senate GOP Leader Mitch McConnell (Ky.) said Schumer was “intent on calling a vote that he knows will fail.”
“These discussions have yet to conclude. There’s no outcome yet. ... So, obviously, if the Democratic leader tries to force a cloture vote on a bill that does not exist, it will fail,” McConnell said.
The bipartisan group has been holding nearly daily meetings to try to finalize the agreement amid a rolling struggle over how to pay for the deal. While the agreement costs $1.2 trillion over eight years, it only includes $579 billion in new spending.
The group had initially set an end-of-the-week deadline last week to finalize its remaining issues, and Schumer announced Thursday that he was going to force a vote Wednesday to try to start a formal debate after weeks of waiting for the bipartisan group to finalize its agreement.
But the group’s deadline slipped with senators leaving town last Thursday without a deal finished. Schumer’s deadline also sparked fierce GOP fury, with negotiators and members of leadership accusing Schumer of undercutting the talks.
Though the vote failed Wednesday, Republican negotiators say they will be ready to start debate early next week assuming the group can finish out its final hurdles.
“Today we’re not going to be able to support moving forward, we will be able to on Monday,” Sen. Rob Portman (R-Ohio), who has led the talks for Republicans, told CNBC’s “Squawk Box.”
Sen. Mitt Romney (R-Utah), another member of the negotiating group, said that 10 to 12 Republicans would be ready to start debate by early next week.
“Almost everything is resolved. ... We will have another vote I hope next week and we’ll be able to proceed to the bill. We have enough Republicans, 10 or 12 or more Republicans, that are supportive of going on the bill,” Romney said.
A group of 11 senators, including Romney and Portman, sent Schumer a letter reiterating that they could be ready next week. The larger bipartisan group of 22 is expected to also release a statement later Wednesday that according to Portman, the lead GOP negotiator, will say that the group is “working hard and feeling optimistic.”
But the group is still trying to work out final sticking points including a disagreement on rail transit.
Wednesday is also the deadline that Schumer set for Democrats to be ready to move forward on a budget resolution that sets up the Democrat-only $3.5 trillion bill.
Schumer is facing calls from House progressives to move to the budget resolution because of Wednesday’s failed vote. Democrats will need all 50 votes to advance the budget resolution in the Senate.
Sens. Joe Manchin (D-W.Va.) and Kyrsten Sinema (D-Ariz.) are keeping their powder dry on the budget resolution. And Sen. Jon Tester (D-Mont.) has said he would start debate on the budget resolution but hasn’t said how he would vote at the end.
But top Democrats are feeling confident they’ll be able to keep the caucus together and be ready to take up the budget resolution by early August.
“My hope is that by early August we will have a budget proposal to bring to the floor for a vote,” said Sen. Bernie Sanders (I-Vt.), chairman of the Budget Committee.
National