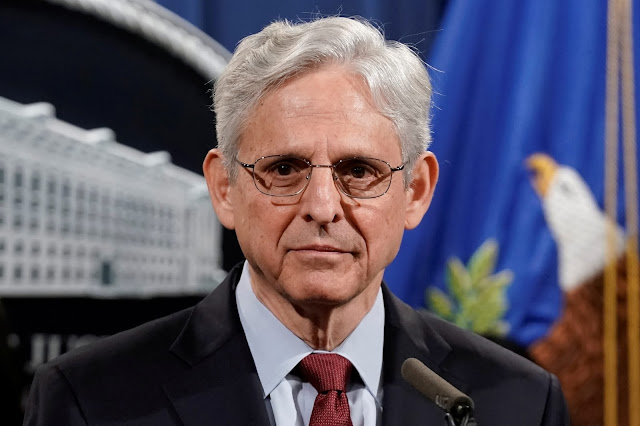 Attorney General Merrick Garland on Thursday announced a moratorium on federal executions, a shift from the Trump administration, which had resumed the use of the death penalty in federal cases.
Garland said in the memo that the Justice Department would also review its policies and procedures to make sure they "are consistent with the principles articulated in this memorandum.”
“The Department of Justice must ensure that everyone in the federal criminal justice system is not only afforded the rights guaranteed by the Constitution and laws of the United States, but is also treated fairly and humanely,” Garland said in a statement. “That obligation has special force in capital cases.”
The attorney general said that the internal review of DOJ policies will include “the risk of pain and suffering associated with the use of pentobarbital,” a drug used during the Trump administration for lethal injections, as well as changes made in November “that expanded the permissible methods of execution beyond lethal injection, and authorized the use of state facilities and personnel in federal executions.”
The federal government under former President Trump in 2020 carried out the first federal executions in the United States in two decades.
There were 13 total executions carried out federally during Trump’s presidency, with some executed just days before he left the Oval Office.
The executions included 52-year-old Lisa Montgomery, the first woman put to death by the federal government in nearly 70 years.
Montgomery was convicted in 2007 of the 2004 murder of a pregnant woman and removal of the fetus from her body using a knife.
The executions under the Trump administration following a 17-year moratorium on the practice also included four Black men, prompting pushback from anti-death penalty advocates and defense lawyers who made several failed attempts to halt the executions.
President Biden during his campaign vowed to end Trump’s resumption of federal death penalties, though his apparent inaction until now prompted backlash from justice reform advocates and fellow Democrats.
After Trump announced the decision to resume federal executions in July 2019, Biden tweeted, “Since 1973, over 160 individuals in this country have been sentenced to death and were later exonerated.”
“Because we can’t ensure that we get these cases right every time, we must eliminate the death penalty,” he wrote at the time.
Opponents of capital punishment expressed frustration with the Biden administration last month after it requested that the Supreme Court reinstate the death penalty against Boston Marathon bomber Dzhokhar Tsarnaev.
Tsarnaev received the death penalty in 2015, but a federal appeals court last year vacated the sentence, ruling that the trial court had failed to effectively screen jurors for possible bias, as well as the fact that the court excluded evidence showing Tsarnaev had been influenced by his older brother.
National