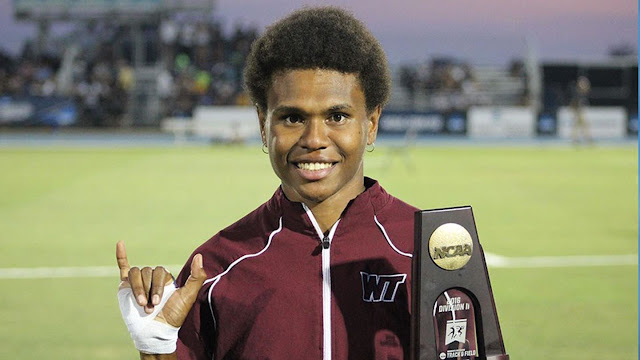 Former West Texas A&M track & field standout Rellie Kaputin will represent her home country of Papua New Guinea at the Olympics, Athletics PNG announced earlier this week. She will compete in the long jump in Tokyo joining current WT sprinter Benjamin Azamati, who will compete in the 100-meters and 4x100-meter relay.
Kaputin was one of 32 athletes selected to compete in the long jump and one of two to earn a spot by university place. This will mark her second time competing at the international level as she finished 30th in the long jump at the 2017 IAAF World Championships in London, England.
She is also the second former WT student-athlete to represent Papua New Guinea in the Olympics as Theo Piniau competed in the 200-meter dash in the Rio Olympics in 2016.
Kaputin finished her three-year career in Canyon as a three-time individual champion and 11-time All-American. She was also named the U.S. Track & Field and Cross Country Coaches Association (USTFCCCA) National Field Athlete of the Year in 2017 after scoring 21 points at the NCAA Division II Indoor Track & Field Championships including a win in the long jump.
The Lady Buffs won their first national team title at the outdoor championships in 2017 as she scored 22 of WT's 64 points including a win in the triple jump with the second-best mark in NCAA Division II history, 43-7 (13.28m). She would lead them to another national title in the winter of 2018 at the indoor championships winning the long jump en route to scoring 16 points.
Local