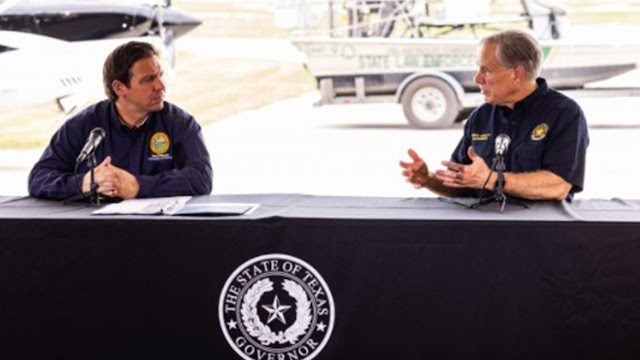 Governor Greg Abbott says the border problem is a national security issue. That was his main point Saturday while hosting Florida Governor Ron DeSantis at the border city of Del Rio.
DeSantis announced last month that Florida would send law enforcement officers to help Texas at the border.
Both governors pointed blame at the White House for a surge in illegal crossings this year.
Gov. Abbott said there’s a dramatic need for manpower and resources, welcoming law enforcement from states like Nebraska, Iowa, South Dakota, Arkansas, and Florida.
"This is a situation where all states need to be a part of the process. The best place to intersect is not in Florida or Iowa, it’s right here on the border," Gov. Abbott said.
Abbott sat alongside Florida Gov. DeSantis to address border security concerns.
Governor Abbott and Florida Governor Ron DeSantis are meeting with state and local officials as well as law enforcement in Del Rio.
At the briefing in Del Rio, DeSantis announced he will keep his Florida law enforcement officers in Texas for at least another year.
"These numbers of people coming, wow," DeSantis said. "You have drugs, which we are worried about, and criminal aliens."
Customs and Border Protection announced Friday that there were almost 190,000 attempted entries at the southern border in June, which is a 21 year high in monthly crossing.
Plus, a milestone of 1.1 million apprehensions has been recorded for this fiscal year.
Federal officials acknowledge a pandemic related ban on seeking asylum led to repeated attempts to cross, causing what they call an "overstated number of unique individuals".
"We’ve never seen anything like the explosion of illegal immigration like we’ve seen under the Biden Administration," said Brandon Judd, president of the National Border Patrol Council.
The new data adds to the Republican attack against the current border plan.
However, the Biden Administration said the surge stems from root causes like poverty and violence.
"Obviously, we would like to see the old policies from the previous admonition simply put back in," DeSantis said.
Gov. Desantis is a frontrunner for the GOP pick in the 2024 presidential election, given former President Donald Trump doesn’t run.
"We want to get away from the Biden Administration’s approach of catch and release. We want to arrest and jail," Abbott said.
Abbott also pointed the finger at Texas Democrats, who he said are blocking additional funding at the border by leaving the state and breaking quorum.
It's an item that’s on the governor's special session agenda and has already passed through the Texas Senate.
"They need to come back get back to work and do their job by providing the counties with funding that is needed so these counties can respond to a record-breaking challenge," Abbott said.
Abbott also brought up the increase in fentanyl seizures at the border.
According to Customs and Border Protection, fentanyl seizures in June 2021 are 78% higher than all of fiscal year in 2020.
Texas