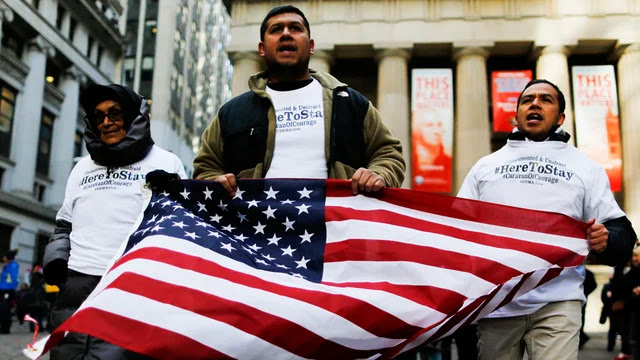 A federal judge in Texas blocked new applications for the Deferred Action for Childhood Arrivals (DACA) program in a ruling Friday, increasing pressure on Congress to find a legislative solution for undocumented immigrants who arrived in the country as minors.
Immigration advocates had been expecting the ruling for weeks, fearing Judge Andrew Hanen —  a George W. Bush appointee who is known for his tough stance on immigration matters — could rule against the legality of the Obama-era program as a whole.
Hanen ruled that the Department of Homeland Security (DHS) violated the Administrative Procedure Act (APA) "with the creation of DACA and its continued operation."
However, the judge recognized that current DACA enrollees are dependent on the program's benefits — deferral from deportation, advance parole to travel internationally and a work permit — in order to go about their daily lives.
"That reliance has not diminished and may, in fact, have increased over time," wrote Hanen.
On those grounds, Hanen allowed current recipients to maintain and renew their benefits pending a future order from himself, the Fifth Circuit, or the Supreme Court.
While Hanen's order will leave intact the status of the more than 600,000 current DACA recipients, it also puts in limbo the status of tens or hundreds of thousands of other so-called Dreamers — including 50,000 new DACA applicants who had not yet been enrolled in the program.
DACA was put into place by former President Obama in 2012 after attempts at passing legislation to protect Dreamers failed to pass Congress.
The program was viewed as an executive overreach by its opponents, including former President Trump, who made repeated attempts to end DACA.
“Today’s ruling is deeply disappointing, but does not obscure two basic facts: DACA is a tremendous success that has transformed hundreds of thousands of lives, and Congress absolutely must act right away to pass a pathway to citizenship," said Todd Schulte, president of FWD.us, an immigration advocacy group.
National Texas