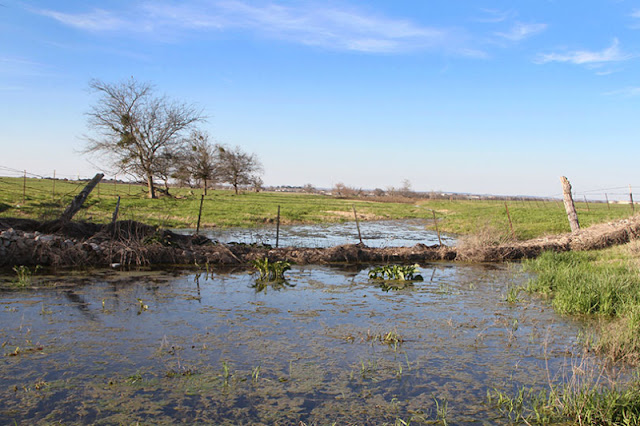 By Jennifer Whitlock
Last month, federal officials announced plans to revise the definition of the “waters of the United States” (WOTUS) as defined in the 2020 Navigable Waters Protection Rule (NWPR).
The 2020 definition, enacted by President Donald Trump’s administration, detailed waters that do not fall under federal jurisdiction through the Clean Water Act (CWA) to include features only containing water in direct response to rainfall, groundwater, many ditches, farm and stock watering ponds, waste treatment systems and prior converted cropland.
The NWPR followed up on rulemaking by the Trump Administration to repeal the Obama-era WOTUS rule that many agricultural organizations, including Texas Farm Bureau (TFB), said jeopardized farms and ranches by allowing EPA to define stock tanks, ditches and even fields as WOTUS.
“After reviewing the Navigable Waters Protection Rule as directed by President Biden, the EPA and Department of the Army have determined that this rule is leading to significant environmental degradation,” U.S. Environmental Protection Agency (EPA) Administrator Michael Regan said. “We are committed to establishing a durable definition of ‘waters of the United States’ based on Supreme Court precedent and drawing from the lessons learned from the current and previous regulations, as well as input from a wide array of stakeholders, so we can better protect our nation’s waters, foster economic growth and support thriving communities.”
The EPA and Army said they are aware of 333 projects that would have required permitting under CWA prior to the NWPR. At the agencies’ direction, the Department of Justice (DOJ) filed a motion in the U.S. District Court of Massachusetts requesting remand of the rule.
In response, Sens. Joni Ernst and Chuck Grassley introduced the Define WOTUS Act to legislatively define WOTUS so a “reasonable” definition of the term would be permanent.
“The Obama-Biden WOTUS rule was an egregious overreach, giving the federal government authority to regulate water on 97 percent of the land in Iowa, and I fought tirelessly to scrap the absurd rule and replace it with one that provides more certainty to Iowa’s hardworking families, farmers and businesses,” Ernst said. “As the Biden administration seeks to undo this work, it’s more important than ever to ensure a new, reasonable WOTUS definition is made permanent—which is exactly what this bill would do.”
Other lawmakers appear to be concerned about the Biden administration’s move to rescind NWPR, as well. In a June 9 Senate Appropriations Committee’s Subcommittee on Interior, Environment and Related Agencies hearing, Alaskan Sen. and Committee Ranking Member Lisa Murkowski asked Regan not to engage in regulatory overreach, saying it was “imperative” to engage with Congress and “consider all perspectives before taking action.”
In another hearing before the House Transportation and Infrastructure Subcommittee on Water Resources and Environment, EPA’s Office of Water Assistant Administrator Radhika Fox said EPA and the Amy Corps of Engineers are “really committed to trying to find a balance” between the two WOTUS definitions.
The agency will soon hold virtual listening sessions and organize meetings with stakeholder groups, including farmers and ranchers, according to Fox. She added regional roundtables will also be held later in the fall or winter.
“EPA and the Corps of Engineers are claiming significant environmental degradation simply because they no longer have the authority to federally regulate ditches, farm ponds and other insignificant water courses that may only flow after storm events. To my knowledge, no actual environmental damage has occurred due to the Navigable Waters Protection Rule,” TFB Associate Director of Commodity and Regulatory Activities Jay Bragg said. “We have fought long and hard to get to the reasonable 2020 definition of waters. The WOTUS Rule was completely unworkable for farmers and ranchers, as evidenced by the Duarte case in California where EPA said he violated the Clean Water Act just by farming on his land. We definitely do not want to go back to that time. Farm Bureau will continue to watch this issue closely and advocate for a definition that doesn’t include farmland, stock tanks and ditches as part of WOTUS.”
National