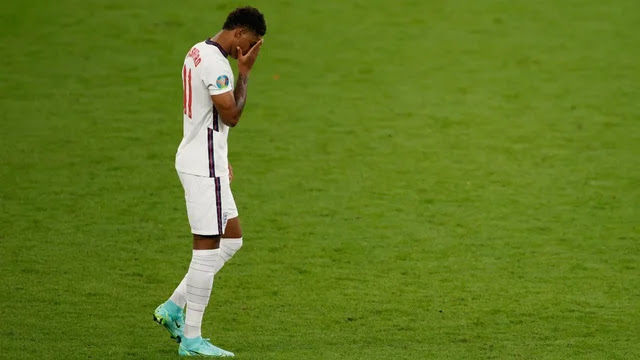 Three Black players on the English soccer team were the target of racist attacks after the team lost the UEFA European Championship final to Italy in a shootout.
Marcus Rashford, 23, Jadon Sancho, 21, and Bukayo Saka, 19, all faced racist abuse after they missed penalty shots during the highly watched match on Sunday, according to Reuters.
The Metropolitan Police called the abuse against the three players “unacceptable,” and said authorities will probe the “offensive and racist” social media posts that were published after Italia’s 3-2 win, The Associated Press reported.
A mural of Rashford in south Manchester was also defaced following Sunday’s game, according to the AP. Greater Manchester Police said it was looking into the “racially aggravated damage.”
The English Football Association (FA) said it was “appalled” by the online racism aimed at the players.
“We could not be clearer that anyone behind such disgusting behaviour is not welcome in following the team. We will do all we can to support the players affected while urging the toughest punishments possible for anyone responsible,” a spokesperson wrote in a statement posted to Twitter.
U.K. Prime Minister Boris Johnson also condemned the attacks on the players, calling the actions “appalling abuse.”
Johnson has been supportive of members of the team kneeling before games as a form of protest against racial injustice. Last month, his spokesperson said he is "more focused on action rather than gestures," before amending that statement to say the prime minister “respects the right of all people to peacefully protest and make their feelings known about injustices,” according to the AP. He also said he hoped to cheer on the team and “not boo.”
He has faced criticism, however, for emboldening those who booed the team for protesting by taking a knee before their games, the news service noted.
The FA called on the government and social media companies to make changes to prevent future discriminatory actions.
“We will continue to do everything we can to stamp discrimination out of the game, but we implore government to act quickly and bring in the appropriate legislation so this abuse has real life consequences,” the association wrote.
“Social media companies need to step up and take accountability and action to ban abusers from their platforms, gather evidence that can lead to prosecution and support making their platforms free from this type of abhorrent abuse,” it added.
The English soccer team also said it was “disgusted” by the attacks on members of its coalition.
Gareth Southgate, the coach of the team, said the actions against the team were “unforgivable.”
“We have been a beacon of light in bringing people together, in people being able to relate to the national team, and the national team stands for everybody and so that togetherness has to continue,” Southgate said Monday, according to the AP.
World