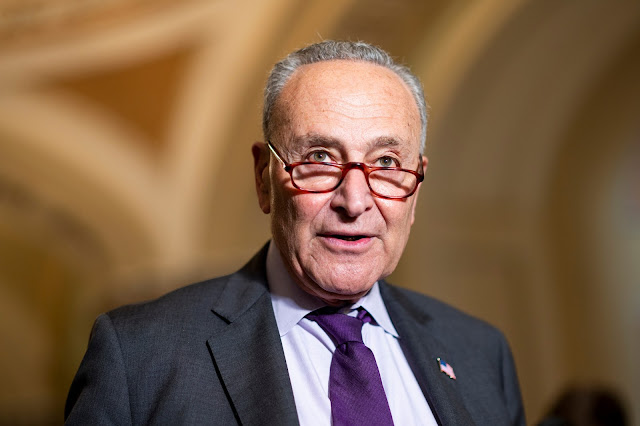 Senate Majority Leader Charles Schumer (D-N.Y.) and Budget Committee Democrats, led by Sen. Bernie Sanders (I-Vt.), have reached a deal on a $3.5 trillion price tag for a Democratic-only infrastructure package.
Schumer, emerging from an hours-long meeting with Budget Committee Democrats, said they had reached a deal on the budget resolution — which greenlights reconciliation, the process Democrats will use to bypass a GOP filibuster on the infrastructure bill — including a $3.5 trillion top-line figure. President Biden is coming to meet with Senate Democrats on Wednesday, as Democrats work lockdown support for the deal.
"The budget committee has come to an agreement. The budget resolution with instructions will be $3.5 trillion," Schumer said, speaking to reporters with Sanders and other members of the panel. "Every major program that President Biden has asked us for is funded in a robust way."
The deal will also include funding for expanding Medicare to cover dental, vision and hearing and address climate change — key asks from progressives including Sanders. A Democratic aide familiar with the deal said that the budget resolution will also include language prohibiting taxes from being raised on individuals who make less than $400,000 or small businesses.
"What this legislation says among many, many other things ... is the wealthy and large corporations are going to start paying their fair share of taxes, so that we can protect the working families in this country," Sanders told reporters.
The agreement is a significant breakthrough for Democrats' infrastructure push as the party faces a tight timeline and even tighter margins to advance Biden's sweeping jobs and families plan.
Schumer has vowed to hold votes on two pieces before the Senate breaks for the August recess: A smaller $1.2 trillion over eight years bipartisan deal and the budget resolution that includes the instructions for and sets up a separate Democratic-only bill.
To pass both the budget resolution and a $3.5-trillion infrastructure bill through the Senate Democrats will need total unity from all 50 of their members. Democrats declined to say on Tuesday night if they had unified support.
"We are very proud of this plan. We know we have a long road to go. We're going to get this done for the sake of making average Americans' lives a whole lot better for us," Schumer said.
Some of the biggest swing votes for Democrats aren't on the budget committee.
Sens. Joe Manchin (D-W.Va.) and Kyrsten Sinema (D-Ariz.), who aren't on the panel, have signaled they are open to using reconciliation to pass a larger Democratic-only infrastructure bill, in addition to the bipartisan package they are currently negotiating. But they haven't endorsed a specific price tag.
Manchin previously suggested to ABC News that he was interested in a smaller figure, saying that "if that’s $1 trillion or $1.5 trillion or $2 trillion, whatever that comes out to be over a 10 year period, that’s what I would be voting for."
He also told reporters earlier Tuesday that he believed both the Democratic-only bill and the bipartisan package had to be fully paid for.
“I think everything should be paid for. We’ve put enough free money out,” Manchin said.
In a boon, Democrats indicated on Tuesday night that they would be able to meet his red line, after Schumer first told reporters on Tuesday afternoon that he believed it was possible.
"The plan we've put together, which is fully paid for, will make the investments in American families, will take on what Bernie and frankly led mostly by Sheldon Whitehouse, the existential threat of climate change, in a way that will meet the needs of leading the world on this critical issue," said Sen. Mark Warner (D-Va.), a member of the Budget Committee and a key negotiator told reporters.
National