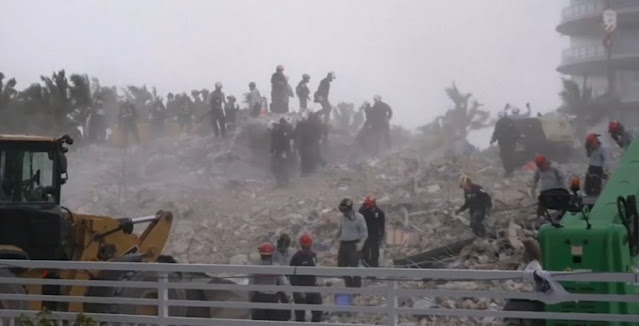 Miami-Dade County Mayor Daniella Levine Cava (D) announced Wednesday evening that eight more victims had been recovered from the Surfside, Fla., condo collapse, bringing the number of confirmed deaths to 54.
She said 200 people have been accounted for and 86 people are still unaccounted for.
Cava also that the transition from search and rescue efforts to recovery would begin on midnight Thursday.
“The announcement today comes as a result of a consensus by those closest to the rescue efforts that the possibility of someone still alive is near zero,” Surfside Mayor Charles Burkett said on Wednesday. “They are probably right. But in the end, God is still in charge. And while there seems to be no chance of finding life in the rubble, a miracle is still possible.”
Cava said authorities, first responders and faith leaders were marking the transition with a moment of silence in front of the building site “mark the solemn moment of transition.” She also invited members of the media to witness the ceremony.
Miami-Dade Fire Rescue Assistant Chief Ray Jadallah said that the decision was based on several factors.
"These engineering factors include you know the building collapse itself - the pancake, which gives you the lowest probability of survivability, coupled with the fact that it gives you very little voids," Jadallah said.
"This is probably in regards to numerous building collapses that many individuals have attended across the entire country, one that provided the least amount of voids available for survivability," he continued.
Jadallah stressed that while the transition would occur, their team would continue to work with families.
“Look, I know I spoke to the family, and I can just, you know, reassure them that just because we transferred to a search and rescue to a search and recovery, doesn't necessarily mean that the trucks leave - that everyone leaves, that everyone forgets the families, it's not the case folks,” Jadallah said during the presser.
“We reassure them. The only thing that changes is just the term. resources are still there, The men and women are still there. The support is still there. And again, it's just a term,” he added.
National