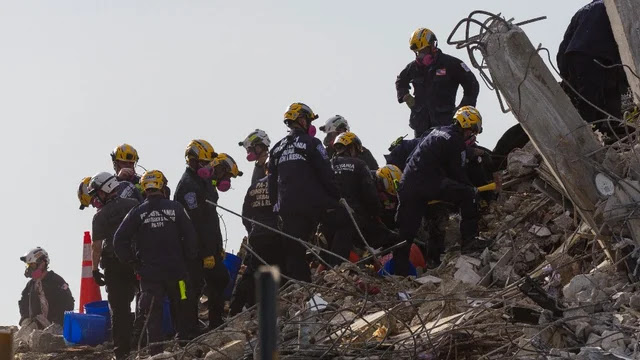 The death toll in the Surfside, Fla., condo collapse has risen to 28, Miami-Dade County Mayor Daniella Levine Cava (D) said Monday evening.
Three bodies were discovered overnight after the remainder of the partially collapsed building was demolished and rescue efforts resumed. A fourth body was found later in the day on Monday.
Two of the victims found overnight were identified as Ingrid Ainsworth, 66, and Tzvi Ainsworth, 68, according to Fox News affiliate WSVN.
Twenty-six of the 28 victims discovered thus far have been identified, Cava said.
Authorities demolished the remaining portion Champlain Towers South due to concerns that incoming Tropical Storm Elsa could cause the building to fall and injure rescue crew members. Though the search resumed, rescuers had to pause several times because of lightning, Cava said.
Florida Task Force 2 Captain Ignatius Carroll told the Fox affiliate that the demolition of the building has made it easier for rescue crews to focus on the area of search.
“It made it difficult for rescuers to get in there and be able to remove some of the heavy equipment,”  Carroll said. “So now that that’s been removed, we’re now able to focus on that area.”
Cava also took time to thank the rescuers and search crews for their work in the last twelve days.
“I'm in awe of the men and women of the use our task force teams who've been continuing to brave, dangerous, dangerous and changing conditions for 12 days, fire, smoke, and now wind and torrential rain, they are continuing the mission and the search of the collapse area,” Cava told reporters Monday evening.
The Miami-area apartment complex collapsed in the middle of the night on June 24. Cava said 191 people are now accounted for while 117 remain missing.
National