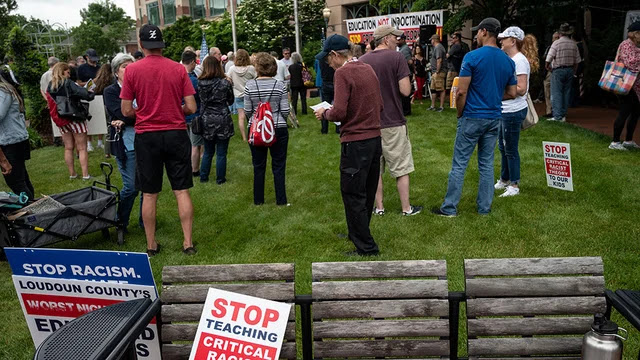 Critical race theory increasingly looks like it will play a major role in the 2022 midterms, as Republicans ramp-up efforts on culture issues in their pursuit of winning back control of both the House and Senate.
Arguments about critical race theory, a decades-old academic theory that puts the nation’s history of institutional racism at the center of teaching history, are regularly featured on conservative media and are increasingly being seen in school debates around the country.
Black lawmakers in Congress are expressing disappointment with the emerging battlelines, arguing it is a sign of the pushback to progress on issues of racial justice.
“Unfortunately, as the country makes progress and deal with truth telling, there are a group of Americans that tries to halt that progress and deals with falsehoods, and tries to stop the growth that the country has made, particularly in relationship to African Americans,” Rep. Gregory Meeks (D-N.Y.), chairman of the Congressional Black Caucus PAC, said.
Many Republicans, however, see an issue that could drive conservatives to the polls in 2022 when turnout is generally lower. Democrats are defending narrow majorities in both the House and Senate. Historically, the president’s party has lost seats in his initial midterm election.
“This is an issue that can really help Republicans win back those suburbs that they might have lost in the 2020 election,” Republican strategist Ford O’Connell said.
CRT is something that “could contribute to a red wave in 2022, particularly as it relates to the House of Representatives,” O’Connell added.
CRT asserts that the U.S. was built upon racist structures such as slavery and Jim Crow, and that remnants of these systems are present today and need to be dismantled because they continue to drive inequality and inequity across the country.
In this way, CRT states, racism is systemic and therefore ingrained in everyday life instead of being an abnormal personal affliction.
The theory was established in the 70s and 80s but isn't widely taught outside of college and universities, but rhetoric used by conservatives in Congress and in state legislatures — that people’s children are being “indoctrinated” by CRT — has been effective in catalysing a groundswell of indignation.
Some view the country’s recent reckoning with race as a step forward when it comes to racial justice. Efforts were energized by the nation-wide reckoning with race that began last year with outrage over the police killings of George Floyd and Breonna Taylor.
The dissent surrounding CRT in some ways draws comparisons to the national discourse around “Defund the Police,” a progressive messaging tool that Democrats have struggled to keep on the rails, resulting in the phrase becoming a key flash point last November.
And like “Defund the Police,” CRT could be a sticking point in congressional House races that are expected to be tight.
One of these races is in Georgia’s 6th Congressional District, where Black Caucus member Lucy McBath (D) is seeking a third term.
The seat has been occupied in the past by prominent Republicans, including former Speaker Newt Gringich and former Sen. Johnny Isakson, and is one that the GOP would love to flip.
“We look at all of that,” Meeks said when asked if CRT messaging could potentially receive more airtime in certain races, like McBath’s.
The Black Caucus, which turned 50 this year, is enjoying increased influence in part thanks to record membership and the fact that two caucus alums now reside within President Biden’s sphere of influence — Vice President Harris and senior White House advisor Cedric Richmond.
Moreover, the White House has been steadfast in its commitment to advance equity throughout the federal government and to stamp out systemic racism. Much of what the CBC has made top priority such as voting rights also sits high on President Biden’s agenda.
McBath is currently the lone featured candidate on the CBC PAC’s website.
Meeks lauded McBath’s work in Congress, citing her as one of the CBC members who represents a district that doesn't have a significant overrepresentation of Black residents.
The district, which encompasses a good portion of the northern Atlanta metropolitan area, is nearly 70 percent white, and just over 13 percent Black. However, Black Georgians make up nearly a third of the state's population, according to the Census Bureau.
When asked how the political wing of the caucus will look to combat messaging around CRT, Meeks underscored the importance of speaking truth to power in regards to how the topic of race is broached.
“When you don't tell the truth or let the truth be told, then falsehood generally prevails,” Meeks said.
“They are  — they being some of the folks who want to hold this country back — are being exposed. And, that's the battle line that’s being drawn and we've got to make sure that we prevent it from happening.”
Democratic operative Ra Shad Frazier-Gaines said Democrats in situations similar to McBath’s don’t have to shy away from conversations surrounding CRT, but that it shouldn’t be part of a stump speech.
“I don't see the need for any member of Congress to address that in their platform,” Frazier-Gaines said.
“If they're asked by media, I personally think that they should divert that energy and attention to superintendents of education for their state, and school board members. That is the easiest way for them to stay out of fire.”
National