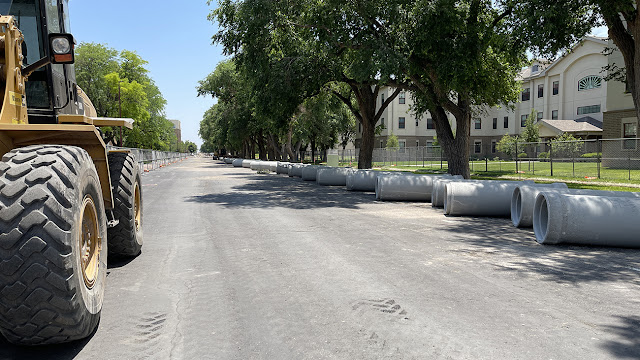 By Chip Chandler
The campuses are mostly quieter for the summer, but millions of dollars in construction projects are actively transforming West Texas A&M University in both Canyon and Amarillo.
About two dozen projects are underway, representing more than $18 million in investment.
The centerpiece projects include the construction and renovation of the Baptist Community Services Nursing Education Floor at Harrington Academic Hall WTAMU Amarillo Center and the refreshing of the Natural Sciences Building on the Canyon campus. Combined budget for the two projects is approximately $10 million.
“These major products will provide students with state-of-the-art facilities that will better prepare them to enter the workforce,” said Randy Rikel, vice president for business and finance
The Virgil Henson Activity Center also is seeing $1.2 million in improvements to its pool, including new flooring and paint. And 26th Avenue, which runs north-to-south through campus, is getting almost $1 million in enhancements for sidewalks, storm sewers and landscaping, designed to make the area more appealing and functional for tailgating during the football season.
Other projects include the re-roofing of the J.A. Hill Chapel and the Fieldhouse (otherwise known as “The Box”), two of the University’s most historic buildings; new flooring in Guenther, Jones, Conner and Cross residential halls; the construction of two swine care units at Nance Ranch; and elevator modernization in the Activity Center, First United Bank Center, Old Main and Mary Moody Northen Hall.
“Summer is an ideal time to undertake these projects because campus life slows down so much,” Rikel said. “But by the time students arrive in August for the fall semester, these newly refreshed areas will make an enormous difference.”
Local