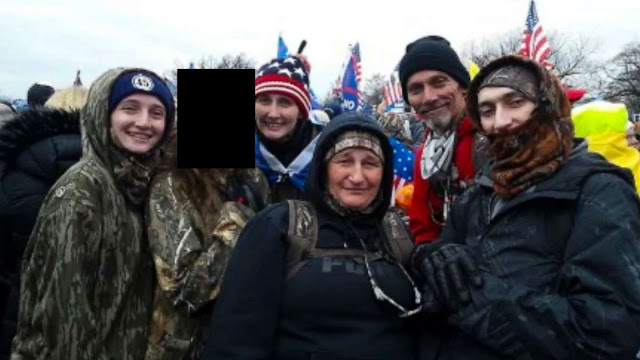 The Justice Department (DOJ) has charged a Borger, Texas couple and three of their children in connection with the Jan. 6 Capitol riot, largely aided by videos, photos and other content posted to social media showing the family members at the Capitol building during the mob attack.
According to a criminal complaint filed in the U.S. District Court for the District of Columbia, Thomas "Tom" Munn, along with Kristi Munn, Dawn Munn, Joshua Munn and Kayli Munn, have each been charged with multiple crimes, including knowingly entering or remaining in restricted groups and disorderly conduct at the Capitol building.
Federal authorities said that a tipster identified as “a  relative  of  Kristi Munn’s fiancé” alerted the FBI to several posts on Kristi Munn’s social media accounts, including a group photo of the family with the caption “Washington  D.C.  here  we  come...  #StopTheSteal  #TrumpIsMyPresident.”
Images postes to Snapchat that were provided by the tipster from Kristi Munn’s account showed images of crowds of pro-Trump demonstrators marching toward and climbing the steps of the Capitol on Jan. 6.
While the tipster revealed that Kristi Munn’s Facebook account “was no longer accessible” following the Capitol riot, subsequent social media searches revealed that each of the five family members had apparently travelled to the Capitol building on or before Jan. 6.
Prosecutors said in the court documents that Tom Munn had shared several post son Facebook urging people to go to D.C. on Jan. 6, including in a December 2020 post with an image of former President Trump that included the text, “POTUS  HAS  REQUESTED  YOUR  ATTENDANCE  WASHINGTON DC JANUARY 6TH 2021.”
On Jan. 6, Tom posted a group photo of the family posing among the crowd gathered at the Capitol building. One family member, who prosecutors said was a minor, was blacked out in the group photos included in the court documents.
The minor was not among the family members charged by federal authorities.
The exact ages of the charged family members were not clear from the court documents.
Authorities said they were also able to identify the Munn family members in security footage from within the Capitol on Jan. 6.
According to messages apparently sent by Joshua Munn, the family had been able to enter the building through a window that had been broken by other rioters.
It was not immediately clear if the family had an attorney representing them in the case.
The family is among the more than 500 people authorities have charged in connection with the mob attack, during which multiple people died and dozens of others were injured amid the chaos.
Those facing charges include several married couples and some children who accompanied their parents in protest of Congress’ certification of President Biden’s election win.
Local