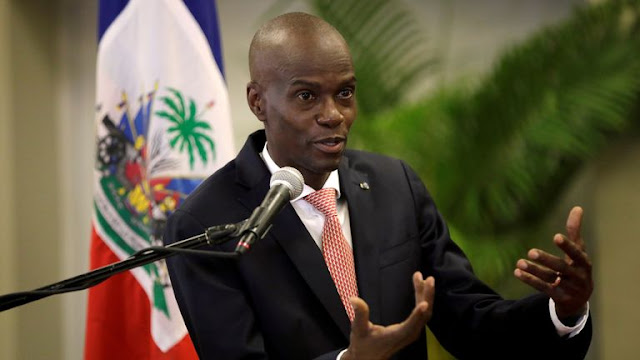 President Biden condemned the assassination of Haiti’s president on Wednesday as a “heinous act” and said that the United States is prepared to assist in the aftermath of the attack to bring security and safety to the country.
“We are shocked and saddened to hear of the horrific assassination of President Jovenel Moïse and the attack on First Lady Martine Moïse of Haiti,” Biden said in a statement Wednesday. “We condemn this heinous act, and I am sending my sincere wishes for First Lady Moïse’s recovery. The United States offers condolences to the people of Haiti, and we stand ready to assist as we continue to work for a safe and secure Haiti.”
Biden, who was expected to be briefed on the attack Wednesday morning, also told reporters that his administration needs “a lot more information” about the assassination but characterized it as “very worrisome about the state of Haiti.” Biden made the comments as he departed the White House for a trip to Illinois to promote his economic agenda.
The world woke up to the shocking news Wednesday morning that Haitian President Jovenel Moïse had been shot dead in an attack on his private residence early Wednesday morning. His wife, first lady Martine Moïse, was wounded and is being treated at a hospital.
Officials have not released information about the individuals who may have been responsible for the attack. Haiti’s interim prime minister, Claude Joseph, said in a statement early Wednesday that a group of unidentified individuals attacked Moïse’s residence around 1 a.m.
The White House earlier expressed shock and outrage at the assassination but said officials were still gathering information about the attack.
“The message to the people of Haiti is this is a tragedy, it’s a horrific crime, and we’re so sorry for the loss that they are all suffering and going through as many of them are waking up this morning and hearing this news,” White House press secretary Jen Psaki said in an appearance on CNN. “We stand ready and stand by them to provide any assistance that is needed.”
The attack came amid growing political turmoil in Haiti, which has grappled with a growing humanitarian crisis and surge in violent crime. Moïse had resisted calls from opposition leaders to step down from his position.
The Biden administration earlier this year extended temporary protected status for Haitian nationals residing in the U.S. for as many as 18 months, citing the security concerns, social unrest and poverty in the country. Some lawmakers on Wednesday demanded the Biden administration do more to bring stability and peace to Haiti.
World