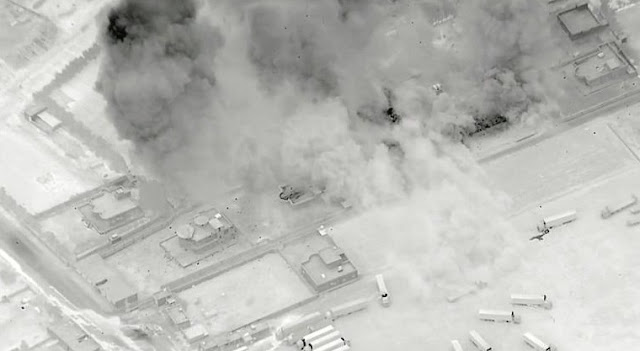 The White House on Monday defended the Biden administration’s weekend military airstrikes against Iran-backed militia groups as several lawmakers in his own party questioned the commander in chief’s war powers.
“The defense of the United States and our interests is our domestic justification for these strikes,” White House press secretary Jen Psaki told reporters during the daily press briefing.
President Biden “takes legal authority and justification for military action quite seriously. And certainly we consult our legal teams to ensure we have that justification. And we certainly feel confident we do,” she added.
The U.S. military on Sunday conducted airstrikes on facilities along the Iraq-Syria border used by Iran-backed militia groups Kata'ib Hezbollah (KH) and Kata'ib Sayyid al-Shuhada (KSS).
Psaki said the strikes were directed at facilities used by the militias for weapon storage, command logistics and operating unmanned aerial vehicles used in attacks against U.S. troops in Iraq.
The strikes mark the second time Biden has hit such militias, the first being in March, in response to attacks targeting American troops in Iraq.
The attacks, most with rockets and some with drones, have been commonplace since Washington, under the Trump administration, ordered the drone strike attack that killed Iranian Gen. Qassem Soleimani last year, further escalating tensions in the region.
Democrats, who are currently in the process of repealing several presidential war powers, are concerned that the tit for tat between the United States and the militias are hostilities that demand Biden ask Congress for approval to launch military action.
“The United States must always take decisive action to protect our personnel and interests against attacks. I will be seeking more information from the Administration in the coming days regarding what specifically predicated these strikes, any imminent threats they believed they were acting against, and more details on the legal authority the Administration relied upon,” Senate Foreign Relations Committee Chairman Bob Menendez (D-N.J.) said in a statement earlier on Monday.
But Psaki said Biden is confident in the administration’s legal justification for the strike under Article II of the Constitution, which allows the president to order self-defense actions that protect U.S. service members.
“The attacks against our troops need to stop, and that is why the president ordered the operation last night in self-defense of our personnel,” she said.
She added that the White House “completed a number of [congressional] member and staff notifications prior to taking action” and is “continuing to brief members of Congress, and we’re also in close touch with partners in the region.”
National