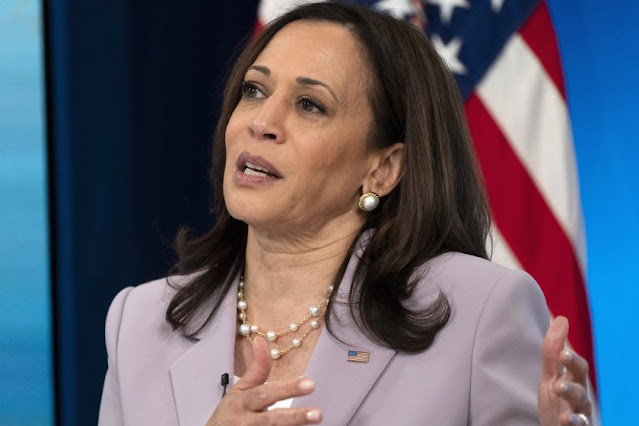 Vice President Harris will visit the southern border on Friday, her first trip to the area since being tasked in March with addressing root causes of migration and after months of pressure from Republicans.
Harris will visit El Paso, Texas, and will be joined by Homeland Security Secretary Alejandro Mayorkas, her office announced. The trip was first reported by Politico. Further details on what Harris will be doing in El Paso were not immediately available.
Republicans and some Democrats, such as Rep. Henry Cuellar (D-Texas), have harped on the lack of a border visit from Harris.
White House press secretary Jen Psaki noted Harris and other administration officials have said she would visit the border when the timing was right.
The trip, Psaki said, "is part of the coordinated effort between her office, her work, the Department of Homeland Security, the Department of Health and Human Services, to continue to address the root causes and work in coordination to get the situation under control."
President Biden announced in March she would be responsible for addressing the surge of migrants at the U.S.-Mexico border as record numbers of young people arrived in the region. The White House later sought to clarify that Harris would be leading efforts to work with Northern Triangle countries on addressing the root causes of migration.
"At some point, you know, we are going to the border," Harris told NBC News earlier this month when asked if she plans to visit. "We've been to the border. So this whole thing about the border. We've been to the border. We've been to the border."
"You haven't been to the border," Lester Holt responded.
"And I haven't been to Europe," she replied. "And I mean, I don't ... understand the point that you're making. I'm not discounting the importance of the border."
Harris earlier this month made her first international trip to Guatemala and Mexico, meeting with the leaders of both countries to discuss U.S. investments and collaborative efforts to reduce the flow of migrants to the southern border. Harris stressed that migrants should not come to the U.S. at this time, a message that drew criticism from some progressives.
The number of unaccompanied children and families agents encountered at the border hit a record of nearly 19,000 in March. Those numbers have steadily decreased in the months since, though agents still encountered more than 14,000 unaccompanied children in May.
Biden officials have insisted it will take time to get the necessary resources in place after the Trump administration focused on restricting avenues to legal immigration. Republicans have blamed the president's reversal of Trump-era laws, such as the Migrant Protection Protocols, for the spike in migrants attempting to come to the U.S.
Harris visit will come days before former President Trump travels to the border alongside Texas Gov. Greg Abbott (R) and congressional Republicans.
"After months of ignoring the crisis at the Southern Border, it is great that we got Kamala Harris to finally go and see the tremendous destruction and death that they've created—a direct result of Biden ending my very tough but fair Border policies," Trump said in a statement on Wednesday.
"If Governor Abbott and I weren’t going there next week, she would have never gone!" he added.
National