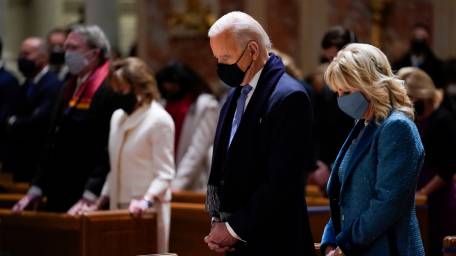 Members of the U.S. Conference of Catholic Bishops released a document clarifying that they will not create "a national policy on withholding Communion from politicians," seeking to tamp down on escalating debate within the church over banning communion for President Biden.
The move came days after a committee voted to begin creating a teaching document on the Holy Eucharist, or the meaning of communion, sparking questions about whether or not the document would include guidelines for politicians who support abortion rights such as Biden.
The Catholic faith opposes abortion. Biden, who regularly attends Mass and takes communion, downplayed last week's move by U.S. bishops to potentially rebuke him over his support for abortion rights.
“There will be no national policy on withholding Communion from politicians," the U.S. Conference of Catholic Bishops said in a Q&A document dated June 21, seeking to clarify the teaching material being drafted on the Eucharist.
"The intent is to present a clear understanding of the Church’s teachings to bring heightened awareness among the faithful of how the Eucharist can transform our lives and bring us closer to our creator and the life he wants for us,” the document continued.
The conference emphasized that "the document being drafted is not meant to be disciplinary in nature, nor is it targeted at any one individual or class of persons," while adding that it would detail "the responsibility of every Catholic" to live in accordance with the Eucharist.
The Q&A added that the document being drafted will place a focus on “all Catholics” to “support human life and dignity and other fundamental principles of Catholic moral and social teaching.”
The committee vote last week triggered debate within the church over whether Biden and other politicians should be denied the right to participate in communion based on their stance on abortion.
Jayd Henricks, a former top lay official with the bishops conference, told The Washington Post on Friday that though Biden’s election set in motion the document’s creation, bishops have a larger concern about Catholics not understanding communion.
Independent consultants are small businesses — sectoral bargaining...
He clarified that the use of the words "national policy” was about “giving guidance on a national level,” The Post reported.
Biden said last week that he believed he would be able to still participate in communion, downplaying the possibility of Catholic bishops potentially barring him from the rite.
“That’s a private matter, and I don’t think that’s gonna happen," Biden said at the time.
National