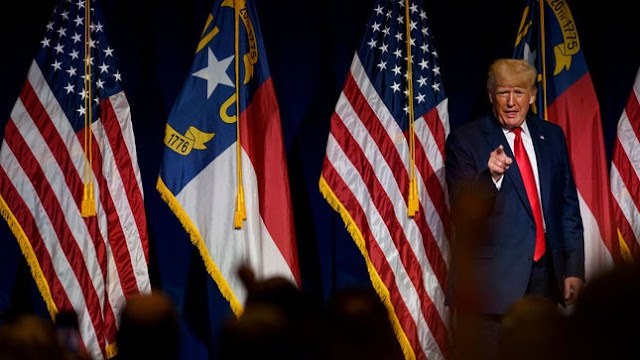 Former President Trump came out swinging during his return to the stage on Saturday, slamming Democrats while also touting his own record in his speech at North Carolina's GOP state convention.
During the speech, which lasted for approximately an hour and a half, Trump took aim at President Biden and Democrats, labeling them “the most radical left-wing administration in history.”
He also bragged about his many achievements during his time in office, claiming he handed the Biden administration “the greatest economy in the history of the world.”
“All Joe Biden had to do was sit back and do nothing. It was taking off like a rocket ship nobody's ever seen,” Trump said. “Instead, the economy is going to hell, and inflation is going to cause a catastrophe in the near future.”
Trump’s speech comes as the GOP is gearing up for the 2022 midterm elections and grappling with the former president's role in the party now that he is no longer in the White House.
It also comes amid speculation that Trump may run for president again in 2024.
The former president took a brief moment to yield his influence, endorsing Rep. Ted Budd (R-N.C.) in his 2022 Senate bid to replace retiring Sen. Richard Burr (R-N.C.). Trump said Budd had found out about the endorsement just 15 minutes prior.
The endorsement came after Lara Trump, Trump’s daughter-in-law, threw cold water on a 2022 Senate bid of her own. However, she left the door open for a possible run for public office in the future.
“No for now, not no forever,” Lara Trump said. “At the right time, I would absolutely love to come back and consider running for something here in my home state because I love it dearly.”
The former president also touched on several issues at the center of the GOP’s attention, including Biden’s $2.25 trillion infrastructure proposal, which has been lowered to $1.7 trillion amid negotiations with Senate Republicans for a bipartisan deal.
“They're also pushing a $2.25 trillion infrastructure bill. That's not infrastructure. It's the kind of things you don't want. Nine percent looks like it might be infrastructure, but mostly it's not infrastructure at all,” he said.
Trump then leaned into the so-called culture wars, blaming Democrats for "defunding the police" and "cancel culture."
He further called for critical race theory (CRT) — which holds that racism is systemic and has been present in institutions, including the law, the economy and schooling, since the nation's founding — to be banned from workplaces and the federal government. Several GOP-led states have already sought to ban CRT in schools.
“Republicans at every level should move immediately to ban critical race theory in our schools,” Trump said to loud applause. “We should ban it in workplaces, we should ban it in our states, and we should ban it in the federal government.”
Trump also took credit for his administration's handling of the coronavirus pandemic — particularly the speed at which an effective vaccine was developed — and took a victory lap amid renewed attention to his supported theory that COVID-19 may have originated from a lab accident.
The former president briefly lashed out Anthony Fauci, the nation’s top infectious diseases expert, saying he’s been “wrong on almost every issue [but] has perhaps never been more wrong than when he denied the virus and where it came from.”
Fauci has faced criticism in recent days after The Washington Post and BuzzFeed News published more than 4,000 pages of his emails, some of which raised the possibility that the virus came from a lab in Wuhan, China. Fauci had previously publicly doubted the theory.
Trump went so far as to say that America should “demand reparations and accountability from the Communist Party of China.”
Trump also repeated his unsubstantiated claims that the 2020 election was stolen from him due to voter fraud and briefly praised an effort by the Arizona state Senate to audit the election in Maricopa County, which Biden won by more than 45,000 votes.
He further touted GOP-led election reform measures being taken up across the country; Georgia, Texas and Florida have passed sweeping election reform legislation, which Democrats, including Biden, have characterized as "Jim Crow in the 21st century."
“In light of so many outrageous wrongs, Republicans across the country are pursuing voting reforms to ensure election integrity,” Trump said. “Joe Biden calls these commonsense reforms un-American, but the thing that is really un-American is an election scam.”
Trump ended the speech with one last parting shot at Democrats, saying, “We know the radical left will stop at nothing in their efforts to destroy the America we love.”
"But with the help of righteous American patriots like all of you in this room, they will fail," he added.
National