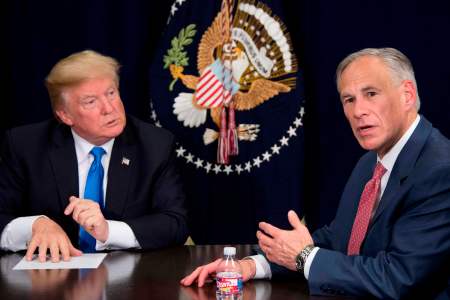 Former President Donald Trump will visit the U.S.-Mexico border later this month as Republicans seek to cast a spotlight on the Biden administration's handling of immigration.
Trump in a statement said he would join Texas Gov. Greg Abbott (R) at his invitation for a tour of the border. The exact location was not immediately clear.
"The Biden Administration inherited from me the strongest, safest, and most secure border in U.S history and in mere weeks they turned it into the single worst border crisis in U.S history. It’s an unmitigated disaster zone," Trump said in a statement.
The Biden administration in its first weeks reversed several Trump-era policies meant to restrict legal and illegal immigration. It lifted restrictions on green card application, undid a travel ban on a handful of Muslim-majority countries, reversed the Trump administration's public charge rule and ended the "Remain in Mexico" policy that required migrants to await adjudication south of the border.
Republicans blamed Biden's swift shift in direction when a record setting number of migrants surged to the U.S.-Mexico border in the first few months of his presidency. Those numbers have since abated, but GOP lawmakers have pressured President Biden and Vice President Harris to visit the southern border to assess the situation and show support for law enforcement.
"What Biden and Harris have done, and are continuing to do on our border, is a grave and willful dereliction of duty," Trump said. "My visit will hopefully shine a spotlight on these crimes against our Nation—and show the incredible people of ICE and Border Patrol that they have our unshakeable support."
Biden tasked Harris with leading the administration's efforts to stem the flow of migrants from Central America. Harris visited Guatemala and Mexico last week to discuss ongoing efforts to provide aid to those countries, as well as El Salvador and Honduras. But Harris and experts have acknowledged the problem will take sustained investment.
Trump's border trip comes as the former president is increasing his public appearances as he simultaneously cements his grip on the GOP and teases a potential 2024 presidential campaign. Trump spoke at a North Carolina GOP event earlier this month and is expected to hold rallies in Ohio on June 26 and Florida on July 3.
Texas