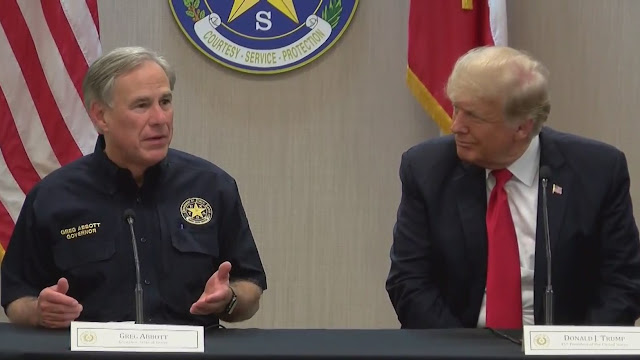 Former President Trump on Wednesday bemoaned what he said was the "sick" state of the U.S.-Mexico border during a trip to Texas with GOP lawmakers.
"We have a sick country in many ways. It's sick in elections and it's sick in the border. And if you don't have good elections and if you don't have a strong border, you don't have a country," Trump said during a roundtable event with Texas state leaders and law enforcement officials.
"So with that, we're going over to the border right now. But we're going to the real part of the border where there's real problems, not a part where you look around and don't see anybody," Trump added, an apparent swipe at Vice President Harris' recent trip to El Paso, where she visited with border agents and saw a border crossing facility.
Trump was accompanied by several of his former administration officials who focused on immigration, including senior aide Stephen Miller, former acting Department of Homeland Security (DHS) Secretary Chad Wolf, former acting Customs and Border Protection head Mark Morgan, former acting Director of Immigration and Customs Enforcement (ICE) Tom Homan and former White House physician and current Rep. Ronny Jackson (R-Texas).
The president looked on with his arms folded as Texas sheriffs reviewed data on increased border crossings earlier this year compared to the same time last year, as well as their findings on the spread of drugs like fentanyl coming into the U.S. via cartels.
Trump made the trip with the intent of highlighting the differences between his own policies that restricted legal and illegal immigration and those of the Biden administration. Conservatives have blamed the current administration's policies for the surge in migrants coming to the southern border this year.
The former president was joined by GOP House lawmakers, many of whom toured the border upon their arrival on Tuesday and met with migrants who made the journey to the U.S.
The president's remarks at the roundtable echoed many of his usual riffs from when he was on the campaign trail or had access to social media.
He chastised Democrats for accusing Republicans who opposed an economic relief package that included funding for law enforcement of trying to defund the police, and he singled out Reps. Alexandria Ocasio-Cortez (D-N.Y.) and Ilhan Omar (D-Minn.) in particular.
He complained about the security of elections, building on months of false claims that the 2020 election was fraudulent, and he mused that President Biden would not be able to pass a basic cognitive exam given by White House doctors.
"What we’ve done was appreciated by the people," Trump said. "And we better get our elections straightened out because you’re going to have a runaway country. You’re going to have a banana republic. You’re going to have a third world country here pretty soon."
Texas