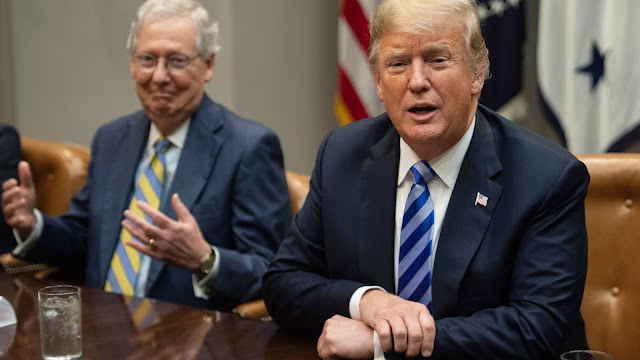 Former President Trump on Tuesday chastised Republican senators for engaging with President Biden and the White House in talks for a bipartisan infrastructure deal.
The former president weighed in negatively on the negotiations just as the White House is hustling to keep enough Republicans on board so the final bill has a chance of overcoming the 60-vote threshold in the Senate.
"So sad to see certain RINO Republican Senators go back and forth to the White House and continually get nothing for infrastructure or anything else," Trump said in a statement, using an acronym for "Republican in name only." "When will they learn that they are being played with, and used by, the Radical Left — and only bad things can happen. Should have never lost the Senate in the first place, thanks Mitch! New leadership is needed, and fast!"
Trump's statement may give cover to some of his allies in the Senate to dig in against the deal, which was briefly imperiled by Biden saying he would not sign a bipartisan package unless a reconciliation bill came to his desk that would have more Democratic priorities.
Sen. Lindsey Graham (R-S.C.), a staunch Trump ally, was among the 11 GOP senators who backed the initial framework for an infrastructure deal, but he has since expressed reluctance about voting for it if Democrats will push through a more partisan reconciliation bill.
Biden has since walked back his comments, and the White House has spent the early part of this week reaching out to staff on Capitol Hill and members of both parties to nail down support for the bipartisan deal.
Senate Minority Leader Mitch McConnell (R-Ky.) said Monday that he hasn’t yet made a decision on whether to support the infrastructure deal between Biden and the bipartisan group of senators, but that he has concerns about how it’s being paid for.
Trump has in recent days issued multiple statements attacking McConnell and blaming him for GOP losses in Georgia's Senate runoffs. The former president was set off by new reporting that McConnell urged former Attorney General William Barr to push back on Trump's false claims of election fraud.
"Yeah, I don't have any observations about his comment," McConnell said when asked about Trump's statement on Tuesday. "I'm focusing on the present and the future. We have a new administration. We have significant differences about many of the things they're trying to do. Although we hope to be able to get a bipartisan solution to the infrastructure needs that we have in the country. So I'm putting all of my focus on the present and the future."
National