Trump brings his road show to the southern border in Texas 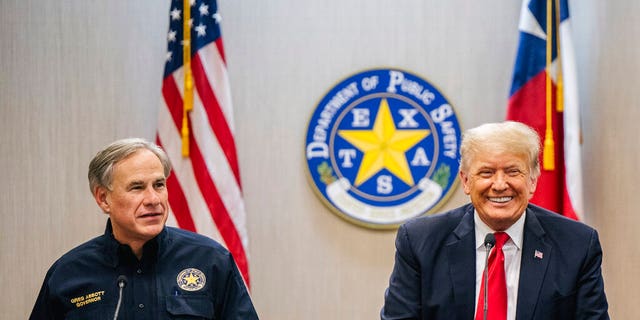 Former President Trump hasn’t formally announced a comeback bid in 2024, but he’s dusting off his old campaign playbook, diving back into the red-hot immigration issue that catapulted him to the White House in 2016.
Trump on Wednesday returned to the southern border and his favorite campaign issue to warn against the flood of illegal immigration that he blamed on the policies of his past and perhaps future political rival, President Biden.
“All Biden had to do is go to the beach,” Trump told conservative supporters at a small rally south of McAllen, against the backdrop of his hulking but unfinished wall. “If he would have just done nothing, we would have now the strongest border we’ve ever had. It was even getting better and better and better, because it was all kicking in.”
Later, Trump declared that liberals “are destroying our country. Biden is destroying our country.”
Trump was joined at the border by a band of House conservative allies and Texas Gov. Greg Abbott (R), who has vowed to finish constructing Trump’s wall using a mix of private donations and state funds backfilled by unused federal COVID-19 relief dollars.
“President Biden is not continuing what President Trump began. President Biden needs to start right there and finish building the border wall,” said Abbott, who needs Trump supporters to turn out in the polls in his bid to win a third term in 2022.
To observers, Wednesday’s event in the sweltering Rio Grande Valley — with oversized American and Texas flags hoisted high into the air — sure seemed like a presidential campaign event. His team played his favorite campaign warmup songs, including Michael Jackson’s “Billie Jean” and Queen’s “Bohemian Rhapsody.” And Trump, sporting his signature dark blue suit and red tie, singled out allies from the conservative Republican Study Committee whom he spotted in the crowd.
He asked Rep. Billy Long (R-Mo.), an auctioneer, to “auction” off the unfinished parts of the border wall; Long obliged. He gave a shoutout to conservative firebrand Rep. Lauren Boebert (R-Colo.), saying no one would break into her house because “the guns will be blazing.” And he said Rep. Madison Cawthorn (R-N.C.) was really “something” for winning his race last year at age 25.
At one point, Trump turned to Texas Lt. Gov. Dan Patrick (R) and asked: “Are you going to be my campaign manager if I do this again? Think I should do it again? Maybe we don’t have to,” possibly a nod to a wild conspiracy theory that Trump will be reinstated as president in August.
As Trump began to walk off the stage, CNN’s Jim Acosta, a familiar thorn in Trump’s side, shouted a question: Is Trump sorry about his role in the Jan. 6 attack on the Capitol? Acosta was promptly booed by Trump loyalists.
Many Republicans are enthused about having Trump back on the campaign trail and highlighting a border surge they say is out of control as they seek to win back the House majority next year.
They view the Biden administration and Democrats as vulnerable on immigration, specifically the surge of unaccompanied minors illegally crossing into the U.S., and believe that the issue will once again animate their conservative base, helping them take back the House and Senate.
“What today proves is that President Trump is leading on the issue,” Boebert, a staunch Trump ally, said before his roughly 20-minute speech. “What President Trump says today matters for the future of the country.”
House Democrats, led by Speaker Nancy Pelosi (D-Calif.), on Wednesday launched a special congressional investigation into the Jan. 6 insurrection and Trump’s role in inciting it. Just two Republicans, Reps. Liz Cheney (Wyo.) and Adam Kinzinger (Ill.), voted for creating the special panel.
Trump launched his 2016 presidential campaign by descending the escalators in Trump Tower and declaring that the undocumented Mexican immigrants are “bringing drugs. They’re bringing crime. They’re rapists.”
His rhetoric was seen as controversial, yet he defeated Democratic nominee Hillary Clinton and won the presidency. Now much of his party — and especially the more conservative House minority — is rallying behind his language.
Earlier Wednesday at a roundtable event with Abbott and Texas law enforcement officials, Trump lamented the “sick” state of the U.S.-Mexico border.
“We have a sick country in many ways. It’s sick in elections and it’s sick in the border. And if you don’t have good elections and if you don’t have a strong border, you don’t have a country,” Trump, who has repeatedly made unsubstantiated charges about last year’s election, said in nearby Weslaco.
The way Monica De La Cruz-Hernandez sees it, Trump’s approach to the border problem is popular among voters here in the Rio Grande Valley, even though an overwhelming majority are Hispanic American.
After losing by less than 3 percentage points to Rep. Vicente Gonzalez (D-Texas) last year, De La Cruz-Hernandez is seeking a rematch — and she’s embracing Trump and his immigration playbook.
Border security is the “No. 1 issue up and down my district, from Hidalgo County, all the way up to Guadalupe County,” De La Cruz-Hernandez​ said. “People think that the problem is right here in Hidalgo County, but this is a statewide and a national issue.”
“These immigrants are coming through our border,” she said, “but they’re being dropped off all throughout my district and throughout the state and the country.”
Texas