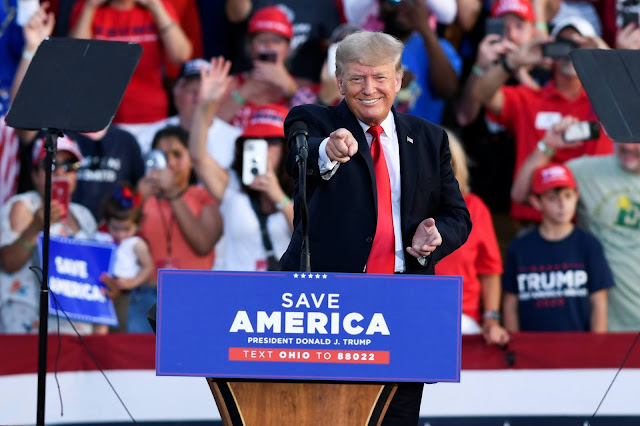 Former President Trump took the stage in his first post-presidential rally in Ohio on Saturday evening, lambasting President Biden’s administration, touting the actions of his administration and urging his supporters to back Republicans in next year’s midterm elections.
"After just five months, the Biden administration is already a complete and total catastrophe. I told you,” Trump told a crowd in the northeast Ohio town of Wellington.
The speech, which lasted over an hour, highlighted a number of issues amplified in Republican circles including opposition to critical race theory and rising crime rates.
“You see these generals on television?” Trump asked the crowd, appearing to reference Chairman of the Joint Chiefs of Staff Gen. Mark Milley’s defense of studying critical race theory this week. “They’re woke.”
Trump also honed in on immigration, praising his administration’s policies at the border before hitting the Biden administration on the issue.
“We have to defund his reckless immigration policies and restore our southern border to where it was,” Trump told the crowd.
The former president also criticized Vice President Harris’s visit to the U.S.-Mexico border last week, claiming the trip occurred after he announced his decision to visit to visit the area.
“Kamala Harris, your vice president, only went to the border yesterday for the one simple reason that I announced that I was going,” Trump said. “If I didn’t do that, I don’t know if she was ever going to go.”
The address was reminiscent of past Trump rallies, with the former president hitting the news media and former secretary of State Hillary Clinton. His crowd of supporters erupted in familiar chants of “CNN sucks” and “lock her up.”
Trump also repeated his claims that the 2020 election was rigged, calling the 2020 election “the big lie.”  Several state and federal election officials, including former U.S. attorney general Bill Barr, have stated that the 2020 presidential election was not tainted by widespread voter fraud.
The Ohio rally was held in part to support Max Miller, a former White House aide and ally of Trump, who is running against Rep. Anthony Gonzalez (Ohio) in the state's Republican primary for the 16th congressional district.
Gonzalez garnered the wrath of Trump earlier this year when he voted to impeach the then-president for inciting the deadly Jan. 6 insurrection at the Capitol.
At Saturday’s rally, the former president claimed Gonzalez asked to fly on Air Force One during a trip Trump took to Ohio during his presidency before he hit the congressman and his other Republican critics.
“He’s a fake Republican and a disgrace to your state,” the former president said. ”And he's not the candidate you want representing the Republican Party. He's the candidate of Liz Cheney, Mitt Romney."
Trump also highlighted next year’s Ohio Senate race, which will likely play a major factor in determining the balance of power in the upper chamber. The former president name-checked Republicans running in the primary, including Jane Timken and Josh Mandel, and labeled Democratic candidate Rep. Tim Ryan (Ohio) as a “total stiff.”
The rally will be the first of many as Trump plans to campaign for Republicans ahead of the 2022 midterm elections. The president is slated to hold a rally on July 3 in Florida, another state with a potentially competitive Senate race.
The question of whether Trump would run for another term as president loomed over the rally, with a number of the event’s other speakers, including Miller and Rep. Jim Jordan (R-Ohio) voicing their support for the idea.
A number of other Republicans have been floated as potential 2024 GOP contenders including former Vice President Mike Pence, Florida Gov. Ron DeSantis, and South Dakota Gov. Kristi Noem, who was in attendance at the rally.
Trump himself teased the idea of running a third time, while falsely claiming he won the 2020 election.
"We won the election twice, and it's possible we might have to win it a third time,” he said.
National