Thoughts on the sentencing of Derek Chauvin 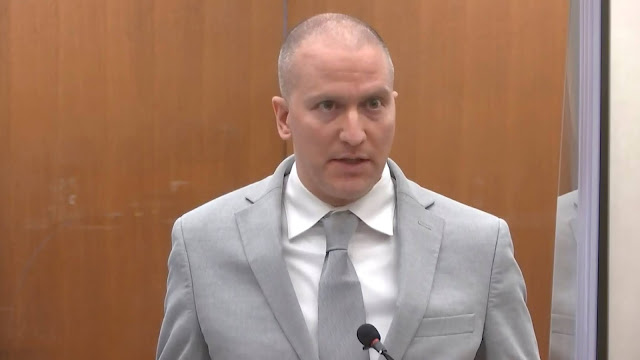 No one can seriously argue that the 22.5-year sentence meted out to former police officer Derek Chauvin was too harsh. After all, he was convicted of murder, and the maximum sentence under the law was 40 years in prison. Chauvin is 45 years old and will be 67 if he serves out his full sentence.
Many murders bring lesser sentences: crimes of passion, crimes of desperation, crimes in which there are some mitigating circumstances.
The murder of George Floyd on a Minneapolis street was a special kind of murder. It galvanized a nation desperately needing to re-examine issues of policing and race and ethical standards.
District Judge Peter A. Cahill, who presided over the case, said that he had based the sentence on the facts established at trial, and not “emotion or sympathy.” Chauvin might have been sentenced to a maximum of 15 years under Minnesota sentencing guidelines, but Cahill ruled in May that Chauvin “abused a position of trust and authority,” and treated Floyd with “particular cruelty” — exacerbating features authorizing the enhanced sentence.
As a legal matter, it is difficult to question that the sentence was appropriate. Trial judges, even where there are prescribed sentencing guidelines, have virtually unfettered discretion to fashion criminal sentences based on the background of the defendant, the possibly aggravated nature of the crime, the impact of the crime on the victim’s family and the vindication of the public interest. As Daniel Webster famously said: “Every unpunished murder takes away something from the security of every man's life.”
But the interpretation of this particular sentence, whether too lenient or too severe, will leave a lasting benchmark. Chauvin’s sentence awarded him the dubious distinction of being only the second police officer in Minnesota history to be jailed for an on-duty murder and one of only a few officers nationwide. According to data amassed by Ohio criminologist Philip M. Stinson, Chauvin joins the list of eight officers convicted of murdering someone on duty since 2005, with sentences ranging from six years to life.
Many of the cases have gone unpunished for lack of evidence. Until the advent of body cameras, police officers had more wiggle room to distort the facts, cover up for one another and make some reasonable claim of self-defense. Also, juries and prosecutors would give officers the benefit of the doubt. After all, we understand that the police must often make life or death decisions in confronting violent criminals, and to guess wrong means that it will be the officer, who is there to enforce the law, and not the criminal who winds up in an early grave.
But the case of Derek Chauvin changed everything. Chauvin had a disciplinary history of police brutality, and should not have been on the force in the first place. He stands indicted for another crime, a federal civil rights charge alleging that he slugged a 14-year-old with a flashlight and kneeled on him during a 2017 arrest. As former New York City Police Commissioner Raymond Kelly has said, “It’s critical that you not hire your problems. Right now, I don’t think we’re identifying enough people who have deep-seated psychological problems.”
In the case of Chauvin, the evidence was incontrovertible. Cell phone videos by passers by recorded every second of the crime as Chauvin’s knee brutally choked out George Floyd’s life. The distinguishing feature about the case is not that a murder in custody happened, but that it was so well documented as to be indisputable.
What underscored the brutal nature of the crime was the cold face of Chauvin as he went about his murderous task. Sunglasses on his head and hands nonchalantly in his pockets, he seemed to be carrying out a task that was not even unpleasant with no awareness that it was a human being under his knee. All in a day’s work.
There is no hatred in Chauvin’s eyes; instead, something even darker, a look of profound indifference. The Holocaust survivor Elie Wiesel said that to an indifferent person “his or her neighbor are of no consequence…Their hidden or even visible anguish is of no interest.”
A police officer is a member of an honorable and necessary profession. We retain them to do something that we can’t do for ourselves. Rogue cops like Chauvin do untold damage to the profession. They give comfort to the cynic, particularly because the crime is committed by someone charged with a special duty of enforcing the law.
Will the Chauvin sentence lead us to defund the police? Let’s hope not. We need them badly in a society where quite sadly “violence is as American cherry pie.” Will it lead us to police reform, more diversity and inclusion in our police departments, more comprehensive training and a better-educated police force? Let’s hope so.
Opinion