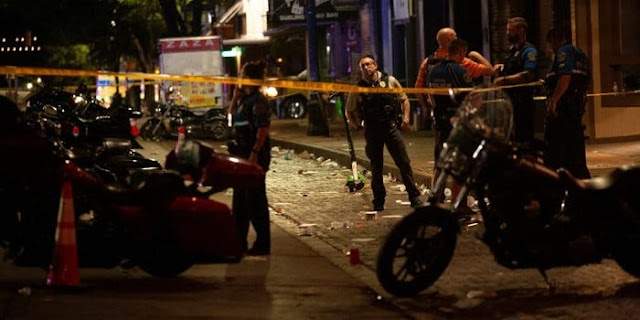 One suspect has been arrested in connection with a mass shooting that left 14 people injured in downtown Austin, Texas on Saturday.
In a statement, the Austin Police Department did not provide any details on either the suspect in custody or a second one who is still at large. The city's police department said that the U.S. Marshals Lone Star Fugitive Task Force assisted in the arrest, but  did not elaborate on how the suspect was found.
During a briefing, Interim Police Chief Joseph Chacon said that the shooting happened around 1:30 a.m. on Saturday morning. Although it was initially reported that 13 people had been injured, Chacon raised that count to 14 during the news conference.
Chacon said that officers rushed six victims to the hospital in patrol vehicles. Austin-Travis County Emergency Medical Services paramedics took four others to the hospital, and three were taken in personal vehicles. Police were later informed that the 14th victim was "self-transported for medical care."
During the press conference on Saturday, Chacon said that two victims were in critical condition, and 12 people who were in stable condition. No fatalities have been reported at this time. He said that almost all of those victims are "innocent bystanders."
Chacon believed that the shooting evolved from an incident between two parties, The Associated Press reported.
A spokesperson for the Austin Police Department was not available for comment.
Texas