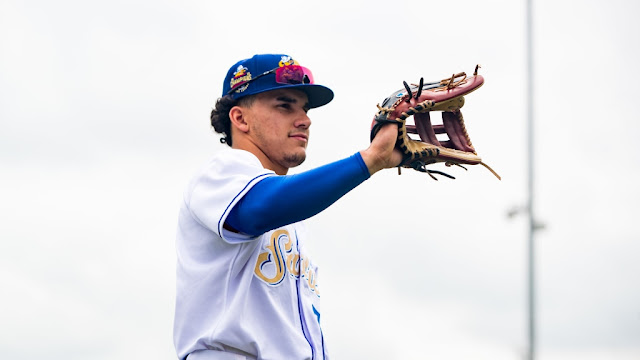 Amarillo Sod Poodles outfielder and D-backs number four-rated prospect (MLB.com) Alek Thomas was selected for a second-consecutive time to the National League roster for the 2021 SiriusXM All-Star Futures Game, which will be played as a seven-inning contest at 3:00 p.m. (ET) on Sunday, July 11 at Coors Field in Denver.
The SiriusXM All-Star Futures Game features the top Minor League prospects competing as part of All-Star Sunday.
Thomas entered the 2021 season as MLB’s No. 62 prospect and earns his second Futures Game selection in just his third professional season.
Currently, in his first season at Double-A, the 21-year-old is batting .284 over 40 games and is tied for second in the Central division with 11 doubles and four triples. Thomas was selected by the Arizona Diamondbacks in the 2nd round (63rd overall) in the 2018 June draft out of Mount Carmel High School in Chicago, IL.
In 2019, Thomas hit .300 with 23 doubles, seven triples, 10 home runs, and 55 RBI in 114 games between Single-A Kane County and High-A Visalia while in 2020, he spent the year at the D-backs alternate training site.
MLB Network will televise the game, which will also stream on MLB.com and air on SiriusXM, at 3 p.m. ET. Scott Braun, Yonder Alonso and Jonathan Mayo will call the action, with Heidi Watney reporting from both dugouts.
Local