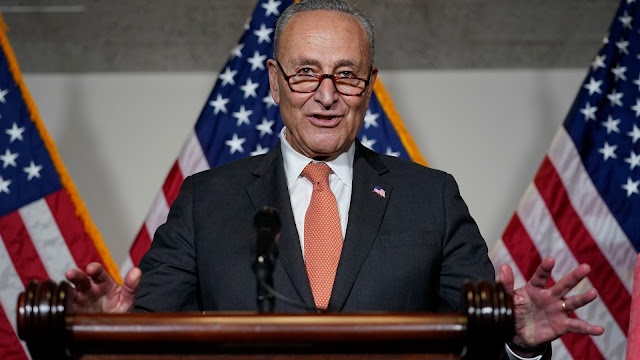 Senate Majority Leader Charles Schumer (D-N.Y.) says he will convene a meeting with all 11 Democratic members of the Senate Budget Committee on Wednesday to begin the process for passing a budget resolution, paving the way for Democrats to pass a major infrastructure bill on a party-line vote.
Schumer said he hopes to pass the budget resolution for fiscal 2022 in July.
“Tomorrow I’m convening a meeting with all 11 Democratic members of the Senate Budget Committee regarding a fiscal year ‘22 budget resolution,” Schumer said.
“Now that President Biden’s fiscal ‘22 budget request has been received by Congress, the Budget Committee can begin the important work of producing a budget resolution,” he added.
Schumer tacitly noted that a budget resolution would set the stage for passing elements of Biden’s $2.25 trillion American Jobs Plan and $1.8 trillion American Families Plan with simple majority votes.
“As you know, a budget resolution will outline how we go forward and includes issues that are affecting, that are part of reconciliation,” he said.
That would set the stage for passing a massive infrastructure investment bill with only Democratic votes after the August recess.
Schumer also plans to bring a scaled-down infrastructure package to the Senate floor in July under regular order.
That bill would need 60 votes to pass outside the reconciliation process. But it’s running into opposition from Senate progressives such as Sen. Elizabeth Warren (D-Mass.) who say they won’t vote for a bipartisan infrastructure bill unless all 50 members of the Democratic caucus agree on the size and shape of the later reconciliation bill, which needs unanimous Democratic support to pass the 50-50 Senate.
“Both are moving forward, the bipartisan track and the track on reconciliation, and both we hope to get done in July, both the budget resolution and the bipartisan bill,” Schumer said.
National