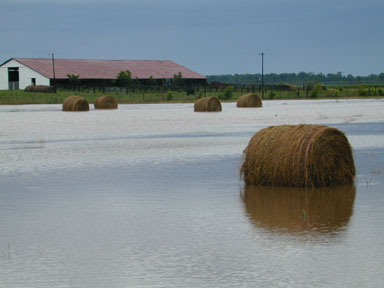 Rains and the threat of rain have kept forage producers in hay-producing regions of the state out of fields and behind schedule for the season, according to a Texas A&M AgriLife Extension Service expert.
Delays represent numerous problems and potential problems for hay producers.
Two months ago, drought was the main concern for Texas forage producers who cut and bale warm-season crops like Coastal Bermuda grass to feed their cattle during the winter or market to livestock operations near and far.
But too much rain has been the chief concern among forage producers in the eastern half of the state for more than a month, said Vanessa Corriher-Olson, Ph.D., AgriLife Extension forage specialist, Overton. Hay meadows with fences and a water source were likely grazed out, but the majority of production acres don’t have those resources available.
“The inability to access fields is the main concern,” Corriher-Olson said. “Fields are too saturated. You can get stuck in a regular truck in well-drained, sandy soil so it makes getting in with heavier equipment to cut and bale or apply fertilizer or herbicide very difficult.”
Some producers were able to get a first cutting baled before the rains settled in, she said. Some were able to cut and rake their hay into windrows, but rains came before the cuttings could cure.
Curing, the process in which cut hay dries down, is a critical balancing act that preserves the plant material and nutritive value and prevents potential losses. Too much moisture can promote two major problems in hay bales – mold, which spoils it as forage for livestock, and heat, which can make tightly wound bales extremely combustible.
The haying process can take one to three days depending on weather conditions like temperature, cloudy or sunny skies, or wind and humidity levels. Hay in windrows can dry quickly on sunny, arid and breezy days but could take longer during cloudy, humid and still conditions.
Corriher-Olson said forecasts have not provided good windows of opportunity for the process.
“Access is the biggest problem, but even the producers who can get in their fields might be looking at a forecast with chances of rain for multiple days each week,” she said. “They either have to risk it or wait. But it’s hard to make decisions with rain in the forecast every day.”
Forage producers could still maximize on hay season
East and Central Texas produce the bulk of the state’s hay supply, but how the torrential rains and subsequent lost cuttings may impact the state’s hay stores this winter will depend on weather throughout the rest of the season.
Some bales are shipped to drier regions of the state or outside Texas to parts of the country dealing with drought, she said.
The soil moisture has created an excellent soil moisture index for hay-producing parts of the state that Corriher-Olson said could, with a few timely rains, carry good hay production into October. The storm systems have also greatly improved soil moisture conditions in drier parts of the state, which will likely reduce their need for supplemental feed until winter.
Depending on the frost date, the potential for multiple cuttings is still there, she said. But producers need to be prepared to pounce on any opportunity to work their hay meadows.
Many fields still contain volunteer cool-season forages like ryegrass because producers missed the opportunity to remove them, Corriher-Olson said.
“Getting rid of cool-season grasses like ryegrass is important to give our warm-season grasses the opportunity to emerge and grow,” she said. “There is good soil moisture and we want to take advantage of that, so taking care of that first cutting and following with a fertilization will help tremendously.”
Beyond timely cutting and baling every three to four weeks when nutritive values peak, Corriher-Olson said fertilization, weed control and pest management will be critical to maximizing forage production this year. Finding access to less expensive alternative fertilizers like chicken litter is an option to avoid high prices on traditional products like ammonium nitrate.
Utilizing herbicide applications properly and timely will help efficacy rates, and scouting for pests like fall armyworms and grasshoppers and acting quickly when they near thresholds could save crops.
“This year it’s going to be very important to be prepared and take advantage of any window of opportunity we have,” she said. “The current state of production is not as bleak as it was in early April. It’s difficult right now, but hopefully we get opportunities for curing and to put some bales up safely. There should be plenty of warm days ahead.”
Local