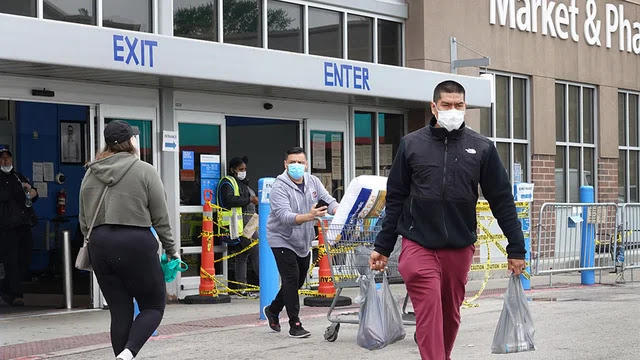 Personal incomes dropped and consumer spending stayed flat on net in May but remained well above pre-pandemic levels, according to data released Friday by the Commerce Department.
Income to households fell by 2 percent in May as the number of stimulus checks authorized by the March COVID-19 relief bill continued to dwindle and more Americans ran out of pandemic unemployment aid.
Consumer spending as measured by personal consumption expenditures (PCE) stayed flat on net, as a $71.5 billion decrease in spending for goods negated a $74.3 billion increase in spending on services, the Commerce Department said. Spending on recreation, restaurants and bars, and accommodations led consumer expenditures in May, countered by a sharp decline in spending on motor vehicles and parts.
“The great consumer spending rotation gathered steam in May as households shunned now-expensive goods in favor of once-familiar services,” said Lydia Bossour of Oxford Economics in a Friday analysis.
American consumers have shifted spending away from goods — which dominated household purchases for most of the pandemic — to services and experiences severely restrained by COVID-19.
Supply shortages have also driven prices higher for new and used automobiles, consumer electronics and a wide range of other goods, suppressing sales of those products. At the same time, the sharp increase in demand for restaurant meals, airplane tickets, hotel rooms and other pandemic-limited activities have driven prices for those services higher as well.
The PCE price index — the Federal Reserve’s preferred gauge of inflation — rose 3.9 percent from a year ago and 3.4 percent minus volatile food and energy prices. While Fed officials and many economists expect inflation to settle down before the end of the year, the dynamic still poses considerable challenges for both the central bank and President Biden.
“Consumers are shifting their focus from spending on goods to services, but the underlying trend for consumer spending remains red-hot. The result is showing up in prices,” wrote Diane Swonk, chief economist at Grant Thornton, in a Friday analysis.
“Many of the increases we are currently seeing will play out as we move into the summer months when the effect of a sharp drop in prices a year ago dissipates. The remainder will intensify debate within the Fed about when to taper asset purchases and hike rates.”
National