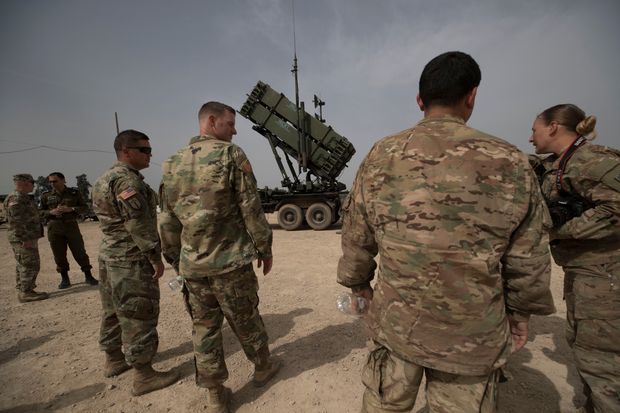 The Biden administration is withdrawing “certain forces and capabilities," mostly air defense systems, from the Middle East, the Pentagon confirmed Friday.
“The secretary of Defense directed the commander of U.S. Central Command to remove from the region this summer certain forces and capabilities, primarily air defense assets,” Pentagon spokesperson Cmdr. Jessica McNulty said in a statement.
“This decision was made in close coordination with host nations and with a clear eye on preserving our ability to meet our security commitments,” McNulty added. “It’s about maintaining some of our high demand, low density assets so they are ready for future requirements in the event of a contingency.”
The department “will not provide specific details,” the statement said, adding that “out of respect for” partners “and operational security, we will not disclose locations, dispositions or timelines.”
The Wall Street Journal, which first reported on the withdrawals, said the Pentagon is withdrawing eight Patriot anti-missile batteries from countries including Iraq, Kuwait, Jordan and Saudi Arabia and another missile defense system known as THAAD from Saudi Arabia, as well as the hundreds of U.S. troops who operate and support those systems.
Fighter squadrons assigned to the region are also being reduced, according to the Journal.
Some assets will be brought back to the United States for “much needed maintenance and repair,” while others will be redeployed to the other regions, McNulty said.
“We maintain a robust force posture in the region appropriate to the threat and are comfortable that these changes do not negatively impact our national security interests,” she added. “We also retain the flexibility to rapidly flow forces back into the Middle East as conditions warrant.”
The shuffling away from the Middle East comes ahead of the completion later this summer of the global force posture review the Pentagon started at the beginning of the Biden administration, as it seeks to reorient the military toward competition with China and Russia.
It also comes as U.S. military fully withdraws from Afghanistan in line with President Biden’s order to be out by September.
Most of the latest reductions are coming from Saudi Arabia, according to the Journal. Defense Secretary Lloyd Austin notified Saudi Crown Prince Mohammed bin Salman about the changes in a June 2 call, and the military began making the reductions afterward, the report added.
The Trump administration bulked up U.S. military assets in Saudi Arabia and elsewhere in the Middle East amid its so-called maximum pressure campaign against Iran, including deploying missile defenses after a 2019 attack on a Saudi oil field blamed on Iranian drones.
The United States also moved Patriot systems into Iraq following the Iranian missile strike on a base housing U.S. troops in retaliation for the U.S. drone strike that killed Iranian Gen. Qassem Soleimani.
Republicans quickly criticized the Biden administration’s move Friday.
“Neville Chamberlain, fresh off giving Putin a multi-billion-dollar pipeline, now pledges to withdraw Patriot and THAAD anti-missile systems in the Middle East, and facilitate Iran’s conquest of the region,” Sen. Ted Cruz (R-Texas) tweeted, referencing the British prime minister best known for the policy of appeasement toward Nazi Germany.
But the Pentagon insisted it has an “enduring commitment” to the Middle East even as it draws down there.
“Our enduring commitment in the region is very clear from the incredible range of partnership activities and close defense consultations we conduct, to our significant remaining ground, air, and naval footprint,”  McNulty said.
“The presence of certain assets and forces is only one factor in our relationship," she added. "The Defense Department maintains tens of thousands of forces in the Middle East, representing some of our most advanced air power and maritime capabilities, in support of U.S. national interests and our regional partnerships.”
World