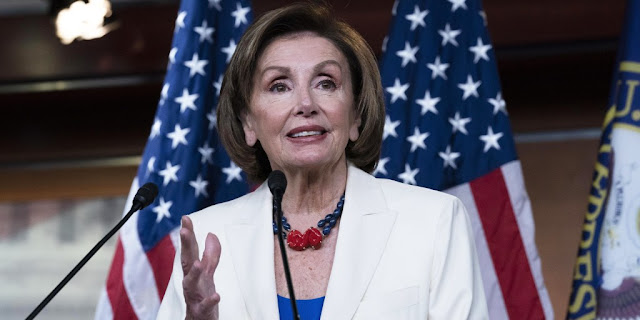 The Democrats' investigative strategy surrounding the Capitol attack of Jan. 6 was thrown into confusion on Tuesday night after party sources mistakenly reported that Speaker Nancy Pelosi (D-Calif.) was forming a select committee to probe the violent episode.
Pelosi, stepping out of her office in the Capitol, rejected that version of events out of hand.
"No, I did not make that announcement," Pelosi said. "Somebody put out a false report."
A Democratic source had earlier told a number of reporters that Pelosi had announced to members of the Democratic Steering and Policy Committee her intent to form a special congressional committee to examine the mob attack of Jan. 6.
Pelosi spokesman Drew Hammill later clarified that Pelosi had not landed on a final verdict but had only floated the select committee as among the options on the table.
"Speaker Pelosi told Members she plans to announce WHETHER she will create a select committee THIS WEEK," Hammill tweeted. "Her preference continues to be a bipartisan commission which Senate Republicans are blocking."
The mixed messages came as the very notion of investigating the Jan. 6 riot has become increasingly partisan on Capitol Hill.
The siege was conducted by supporters of then-President Trump who were attempting to block Congress from certifying his election defeat, and Democrats are framing the episode as an assault on the nation's very democracy, one that deserves a deep exploration into its causes. They've pressed to form an independent commission — modeled on the 9/11 Commission — to conduct the probe.
Most Republicans, on the other hand, are pushing to turn the page, warning that such an examination would only reopen old wounds and prevent the divided country from unifying following the attack. All but 35 House Republicans opposed the independent commission, and Senate Republicans last month rallied to block the panel from being formed.
Republican lawmakers are also hoping to flip the House in next year's midterm elections, and they've gone out of their way to remain in the good graces of Trump, who remains enormously popular with Republican base voters.
Most Democrats are siding with Pelosi in favoring the independent commission as their first choice of investigative strategies. Sens. Joe Manchin (D-W.Va.) and Susan Collins (R-Maine) have been trying to convince three of their Republican colleagues to flip their votes and support that legislation, which fell three votes short of defeating a GOP filibuster in the first Senate vote.
That effort remains a long shot, however, and House Democrats are eyeing several ways of having Congress take the investigative lead. The select committee appears to be the favorite. But some lawmakers are also pushing to have one sitting committee, such as House Homeland Security, take the lead.
National