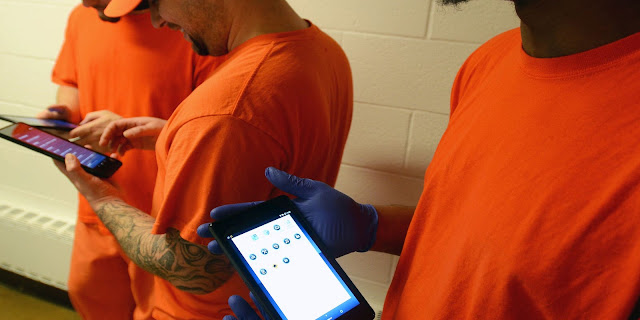 Oklahoma prison inmates will be issued computer tablets on which they will be able to receive educational or vocational training.
The state Department of Corrections's plan is to get every inmate a free tablet that is designed by Securus Technologies, a prison communications company, The Associated Press reported.
Along with specialized training, the tablets will give prisoners access to music, TV, a law library, certain books and the ability to receive and send messages to their family.
The program comes with two main concerns, AP noted.
Although the tablets are free to prisoners, the amount it costs to get access to materials or send messages to their families is great.
Securus Technologies charges 25 cents per email, 75 cents for sending video messages and $1.99 for each song a prisoner downloads.
Another issue is how the public will perceive the program.
“I don’t think the public is going to like it when they see we’re giving all these inmates tablets and they say, ‘My kid can’t get a tablet at school,’ " state Rep. Justin Humphrey (R) said.
The deal between Securus Technologies and the Corrections Department financially benefits both ends as the company charges for features on the tablet and the agency gets $3.5 million annually from the company for five years, according to AP.
After the first five years, the company will give the Corrections Department $3.75 million annually for another five years.
The state has 21,000 inmates who would receive a tablet.
Local