NYC mayoral vote in turmoil after Board of Elections finds 'discrepancy' 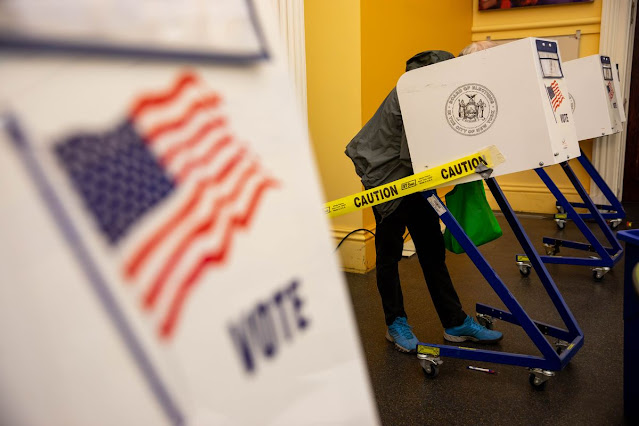 The New York City Board of Elections on Tuesday night announced a "discrepancy" in the ranked-choice vote tallies in the Democratic mayoral primary, sowing confusion hours after newly released results showed a tightening race.
The latest tally of votes released Tuesday afternoon had shown Eric Adams leading Kathryn Garcia by a little more than 2 percentage points, or 15,908 votes.
But shortly after the release of those results, the Board of Elections released a statement saying it had become aware of a "discrepancy" in the vote tally report and was looking into it. Then, not long after that, the ranked-choice tabulations appeared to be taken down from the website.
Later on Tuesday night, the board released another statement saying that around 135,000 test-run "votes" had not been taken out of the system and were inadvertently counted as part of the unofficial results. The board said it would go back and re-tabulate the results without those additional records.
The board's initial tweet came not long after Adams, the Brooklyn borough president, released a statement pushing back on the new count, saying he was seeking clarification from the city Board of Elections.
“The vote total just released by the Board of Elections is 100,000-plus more than the total announced on election night, raising serious questions. We have asked the Board of Elections to explain such a massive increase and other irregularities before we comment on the Ranked Choice Voting projection. We remain confident that Eric Adams will be the next mayor of New York because he put together a historic five-borough working class coalition of New Yorkers to make our city a safer, fairer, more affordable place,” he said.
The error drew swift backlash from journalists and election observers and plunged an already-complicated election into turmoil.
The results released earlier Tuesday surprised many, as it showed a considerably closer race between Adams and Garcia than what many had predicted. The Brooklyn borough president had a much larger lead in tallies released the morning after the primary, when he was ahead of Garcia by 10 points.
But the results released earlier Tuesday didn't represent the full count in the race either, as more than 124,000 absentee ballots have yet to be counted.
Those ballots could allow Garcia, the city's sanitation commissioner, to overtake Adams, and give hope to the race's leading liberal candidate, Maya Wiley, who is now in third place. Adams and Garcia are seen as more centrist candidates and have differed with Wiley over such issues as policing.
This is the first time New York has used ranked-choice voting in its mayoral race. That system is scrambling the result and will not allow New Yorkers or the outside world to know the winner until closer to mid-July.
The process allows voters to rank their top five choices, and subsequent choices beyond the top vote are later reallocated if no candidate wins an outright majority.
The tally released Tuesday was the 11th round of counting.
If a candidate had won more than 50 percent of the first-place votes in the initial tally, the race would have been over. But Adams didn't reach that threshold.
Garcia got as close to Adams in this count in part because she drew strong support from people who voted for Wiley as their first candidate.
After Wiley was eliminated from the contest through the ranked-choice system in the 10th round of this tabulation, Garcia came within 16,000 votes of Adams.
Wiley herself also closed the gap. The former counsel to Mayor Bill de Blasio won 29.3 percent of the vote before her elimination, putting her just behind Garcia.
It's unclear, however, how the absentee ballots will affect the count. Wiley has not been eliminated from the race, as those votes will still be counted.
It was not immediately clear how much Garcia benefited in the ranked-choice voting system from an eleventh-hour alliance she made with former presidential candidate Andrew Yang, who conceded on Election Day. Yang said that voters should write down Garcia as their No. 2 choice if they backed him, though Garcia did not issue a reciprocal call to her supporters.
Garcia also appeared to get a boost from low voter turnout in the Bronx compared with the number of 2018 primary votes cast. Garcia performed well in Manhattan, while Adams had strong showings in the city’s remaining four boroughs.
The ultimate winner of the Democratic primary is likely to skate by in the general election given New York City’s deep Democratic bent. The next mayor will be tasked with handling an array of significant issues, including a spike in violent crime and the ongoing recovery from the coronavirus pandemic.
Guardian Angels founder Curtis Sliwa won the GOP mayoral primary last week.
National