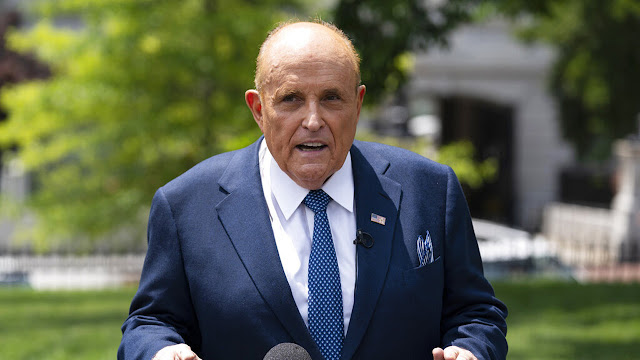 The Appellate Division of the New York Supreme Court on Thursday announced that it is suspending Rudy Giuliani’s license to practice law in the state.
The court concluded that Giuliani made “demonstrably false and misleading statements” to courts, lawmakers and the public when he was representing former President Trump and his campaign in their failed effort to overturn the 2020 election results.
In a 33-page decision, the court said the seriousness of Giuliani's "uncontroverted misconduct can not be overstated."
It determined that Trump's former personal attorney should have his license suspended while a disciplinary action continues to be considered.
“For the reasons that follow, we conclude that there is uncontroverted evidence that respondent communicated demonstrably false and misleading statements to courts, lawmakers and the public at large in his capacity as lawyer for former President Donald J. Trump and the Trump campaign in connection with Trump’s failed effort at reelection in 2020,” the court wrote.
The court said its decision stemmed from Giuliani’s “incredibly serious” misconduct, which it said posed “an immediate threat to the public.”
“This country is being torn apart by continued attacks on the legitimacy of the 2020 election and of our current president, Joseph R. Biden. The hallmark of our democracy is predicated on free and fair elections. False statements intended to foment a loss of confidence in our elections and resulting loss of confidence in government generally damage the proper functioning of a free society,” the court wrote.
Giuliani's lawyers in a statement to The Hill called the move "unprecedented" and rejected the claim that Giuliani poses a danger to public interest.
"We are disappointed with the Appellate Division, First Department’s decision suspending Mayor Giuliani prior to being afforded a hearing on the issues that are alleged. This is unprecedented as we believe that our client does not pose a present danger to the public interest," retired judges John Leventhal and Barry Kamins, who represent Giuliani, said.
"We believe that once the issues are fully explored at a hearing Mr. Giuliani will be reinstated as a valued member of the legal profession that he has served so well in his many capacities for so many years," the attorneys added.
Giuliani, in the days and weeks following the 2020 election, was one of the attorneys overseeing Trump’s legal challenges to the electoral results in a number of states.
The court added in Thursday’s decision that Giuliani’s misconduct will “likely result in substantial permanent sanctions” once the disciplinary proceedings have concluded.
Giuliani, according to the court, had argued in his defense that “there is no immediate threat of future harm” because he has and will “continue to exercise personal discipline” to refrain from discussing the matters of the election in public.
He also contended that he would not be making any additional statements about the election as a lawyer since “legal matters following the 2020 election have concluded.”
The court rejected the former New York City mayor’s position.
“Notwithstanding respondent’s claim that he has exercised self-restraint by not publicly commenting on the election, there are numerous instances demonstrating the opposite.”
The court also cited the Jan. 6 attack on the Capitol as evidence that Giuliani’s false statements were “corrosive” to the public’s trust in elections.
It said Giuliani’s misconduct “directly inflamed tensions that bubbled over into the events of January 6, 2021 in this nation’s Capitol.”
“One only has to look at the ongoing present public discord over the 2020 election, which erupted into violence, insurrection and death on January 6, 2021 at the U.S. Capitol, to understand the extent of the damage that can be done when the public is misled by false information about the elections,” the court wrote.
Giuliani reportedly argued that there was “no causal nexus” that linked his conduct to the Jan. 6 riots.
The court, however, contended that it does not have to illustrate a connection between the two to “understand that the falsehoods themselves cause harm," concluding that the insurrection illustrated the negative effect false statements can have on public trust in elections.
“This event only emphasizes the larger point that the broad dissemination of false statements, casting doubt on the legitimacy of thousands of validly cast votes, is corrosive to the public’s trust in our most important democratic institutions,” the court wrote.
National