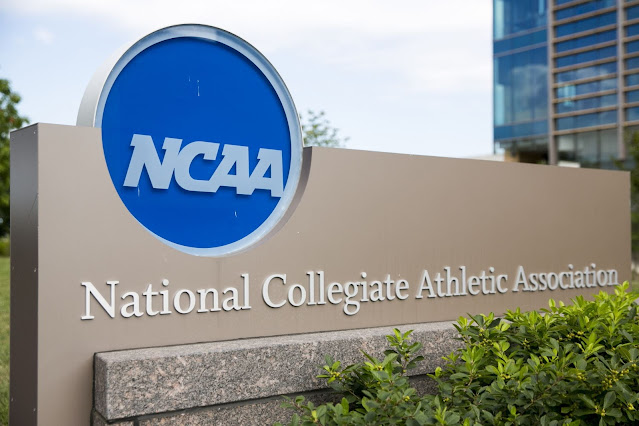 The National Collegiate Athletic Association (NCAA) announces that college athletes will be allowed to profit off their names, images and likeness starting on Thursday.
“NCAA college athletes will have the opportunity to benefit from their name, image and likeness beginning Thursday,” the NCAA said in their statement. “Governance bodies in all three divisions today adopted a uniform interim policy suspending NCAA name, image and likeness rules for all incoming and current student-athletes in all sports.”
The new policy allows student-athletes to engage in name, image and likeness (NIL) activities that are consistent with the state that their schools are in.
Student-athletes must confirm that their NIL activity is within the state law to their school and athletic conference, according to the statement.
NCAA President Mark Emmert said that this marks an important day for student-athletes to “take advantage of name, image and likeness opportunities.”
“With the variety of state laws adopted across the country, we will continue to work with Congress to develop a solution that will provide clarity on a national level. The current environment — both legal and legislative — prevents us from providing a more permanent solution and the level of detail student-athletes deserve.”
Sens. Richard Blumenthal (D-Conn.) and Cory Booker (D-N.J.) shared a co-statement saying they’re happy the NCAA waived Bylaw 12 but concluded that it’s time to do something about giving student-athletes fair benefits.
“The Supreme Court’s decision last week, the panoply of state laws about to take effect, and the powerful grassroots coalition of athletes are all pointing in one direction: it’s time for Congress to act,” Booker and Blumenthal said in their statement. “We need a bill that includes the provisions previously laid out in the College Athletes Bill of Rights. Athletes deserve enforceable health and safety standards, robust educational opportunities, and yes, fair compensation and full rights to their Name, Image, and Likeness.”
This comes as 20 states, including California and Texas, have passed NIL regulations in the past few years, according to The Athletic.
Seven states NIL laws will enact on Thursday with Texas will have their law go into effect on July 1.
National