More than a dozen injured after shooting in downtown Austin 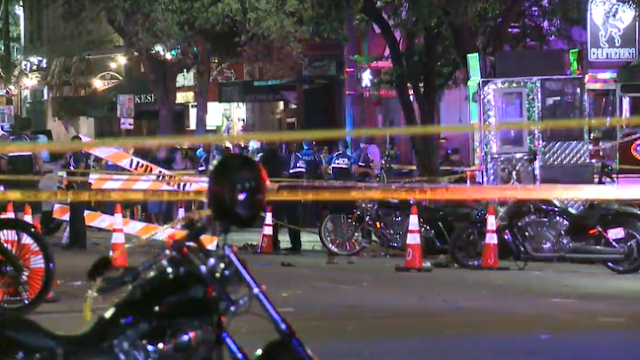 A mass shooting in downtown Austin early Saturday left at least 13 people injured, with two people in critical condition, according to police.
Interim Austin Police Chief Joseph Chacon said in a press briefing Saturday that police received initial reports on shots fired in the city’s entertainment district around 1:30 a.m. local time.
The official said the area on a Friday night is generally “very busy,” and crowds have mostly returned to pre-pandemic levels, with large amounts of people walking through the streets and going to bars when the shooting occurred.
Chacon said that officers rushed six people to the hospital in patrol vehicles upon arriving at the scene, with Austin-Travis County EMS paramedics transporting four victims. Three others were taken in personal vehicles to receive medical treatment.
The police chief said that a total of 12 people were taken to local hospitals, and one other was treated at an urgent care clinic.
Police said that no fatalities have been reported.
Police are still searching for the suspected shooter, whom Chacon described to reporters as possibly a “Black male wearing a black shirt with a skinny build and with dreadlocks."
While officials have not yet determined a motive for the shooting, the attack appears to have been an isolated incident, police said.
Chacon said Saturday that the FBI is assisting local police in its investigation of the shooting.
A press release from the Austin Police Department said the area of the shooting will be closed “for an extended amount of time” to investigate the scene, with officials also collecting and reviewing security camera footage from the area.
Police added that anyone with information related to the shooting may do so anonymously by calling the department’s Aggravated Assault Unit at 512-974-TIPS, through the Crime Stoppers tip line at 512-472-8477 (TIPS) or the Crime Stoppers app.
Texas