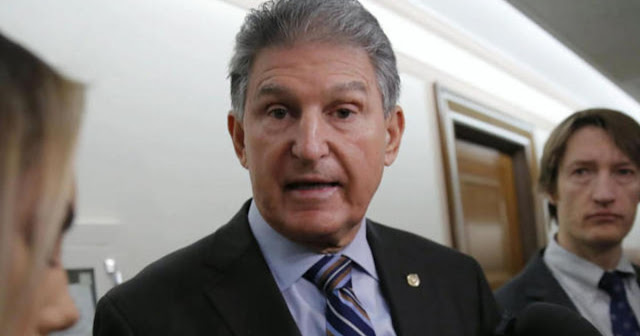 Sen. Joe Manchin (D-W.Va.) met with a group of Texas lawmakers on Wednesday to discuss voting rights, a day after he missed a Democratic caucus lunch where the group briefed senators.
Manchin met with Texas state Sen. Royce West (D), Texas state Rep. Chris Turner (D), Texas state Sen. Jose Menendez (D), Texas state representative and chair of the Texas legislative Black caucus Nicole Collier (D), and Texas state Rep. Jessica Gonzalez, the vice chair of the Texas House's elections committee, a spokesperson for the Democratic senator said.
Democratic U.S. Reps. Henry Cuellar (Texas), Al Green (Texas) and Sylvia Garcia (Texas) also attended and helped facilitate the meeting.
"Thanks to Rep.’s Cuellar, Green & Garcia who helped facilitate a very positive meeting," Menendez tweeted after the meeting, adding that Manchin "agreed that the right to vote is fundamental."
Turner added that it was a "great meeting" and that they had a "in-depth, positive discussion about how we best protect the rights of all voters."
The group of Texas lawmakers are in Washington, D.C., this week meeting with senators, and Vice President Harris, in the wake of Texas Democrats staging a walkout late last month to prevent the advancement of a bill that would place new restrictions on voting.
The meeting with Manchin comes after a group met with his staff on Tuesday.
They also spoke at a closed-door Senate Democratic caucus lunch on Tuesday. Manchin missed the meeting, sparking fierce criticism from progressives. It was the latest meeting where voting rights was discussed that Manchin has missed citing scheduling conflicts.
Sen. Tim Kaine (D-Va.), who has been talking with Manchin ahead of next week's vote on a sweeping election reform bill, told The Hill on Wednesday that he also missed Tuesday's lunch "so that we could work on the one-on-one discussions” with Manchin.
“We were trying to work through, in a good faith way, questions that Joe had raised," Kaine said.
A spokesman for Manchin confirmed that he missed the lunch because he had been meeting with Kaine.
Manchin's closed-door sitdown with the Texas lawmakers is the latest meeting he's had in recent weeks as he faces intense pressure to figure out a way to support the For the People Act, a sweeping bill that he has said he can't back as it's currently drafted.
Senate Majority Leader Charles Schumer (D-N.Y.) took steps on Wednesday night to bring the bill up for a vote on the Senate floor next week, where it will fall short of the 60 votes needed to break a Democratic filibuster.
But Democrats are weeks deep into a frantic behind-the-scenes effort to try to cut a deal on the bill that Manchin could support. That would at least let them unify their caucus on the floor next week.
Manchin hasn't yet said how he'll vote next week. But he's circulated a list to his colleagues of what he does, and doesn't, support in the For the People Act, opening the door to a potential pathway toward an agreement.
“We’ll have to see what changes are made,” Manchin told reporters on Wednesday when asked how he’ll vote.
Texas