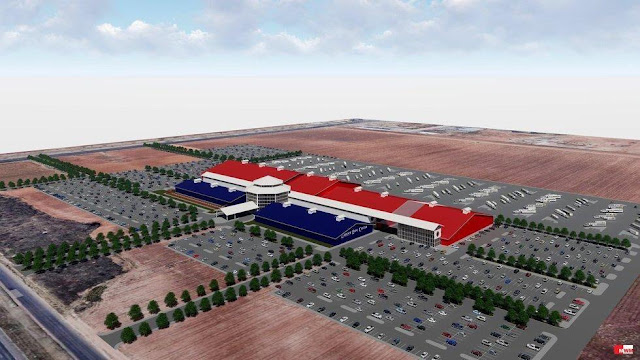 At this point one year ago, the steering committee was expecting steady progress on the highly-anticipated Lubbock County Expo Center, but the ground hasn’t even been broken yet and it’s unclear when the center will finally become a reality.
“We’re just not able to go out there and start moving some dirt like we were hoping we’d be able to,” chairman Randy Jordan said.
The new venture was expected to be complete by April 2022, but now it’s at least 18 months behind.
“We went from having our foot on the accelerator, talking about planning and schematic design, fundraising one day, hitting the bricks the next,” he said.
The county approved the zoning change for the plot of land at North Loop 289 and North University in March 2020. A week later, the pandemic hit.
That was the first roadblock to set the project back. Now, a soft economy and skyrocketing construction costs have paused it indefinitely.
“The best thing for us to do right now: be patient, control the things that we can control. So when these costs and things do moderate and the economy does come back, we’ll be ready to begin construction. To say when that’s going to be, nobody knows,” Jordan said.
But despite the delays, the committee hasn’t lost sight of its final goal.
“It’s taken more steps, longer than we had anticipated, but we’re going to get there. And when we do, the people of Lubbock County are going to be very, very proud of what we’re putting together,” he said.
They don’t have a new cost estimate right now, other than the $60 million that’s already been projected.
But there is some good news. Jordan reports the hotel occupancy tax (HOT) and the short-term car rental tax, that are partially funding the project, are doing better and better each month.
Local