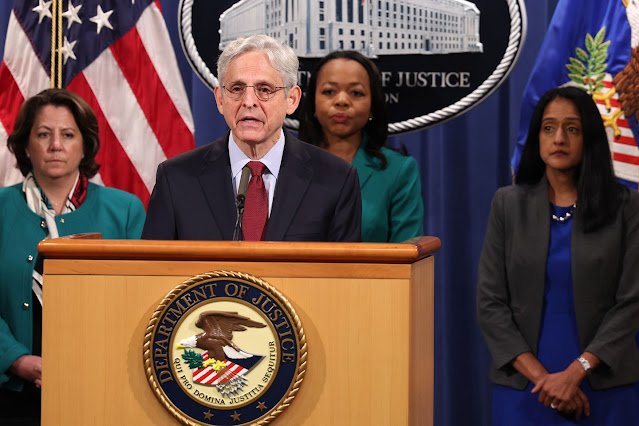 The Department of Justice is suing the state of Georgia over its controversial new law imposing a number of restrictions on voting, Attorney General Merrick Garland announced Friday.
"Today, the Department of Justice is suing the state of Georgia," Garland said. “Our complaint alleges that recent changes to Georgia's election laws were enacted with the purpose of denying or abridging the right of Black Georgians to vote on account of their race or color, in violation of Section 2 of the Voting Rights Act.”
The Georgia law, S.B. 202, passed in March along party lines in the span of just a few hours, imposes restrictions that voting rights groups say will fall most heavily on minorities: It sets new voter ID requirements for absentee ballots, limits drop boxes and even bars passing out food and water to those waiting in line to vote.
The suit is the first from the Justice Department to challenge an influx of state laws they say will limit access to the ballot, with the case largely built on claims the Georgia law was passed with a racial discriminatory intent.
In a speech earlier this month, Garland pointed to 14 “new laws that make it harder to vote,” vowing to scrutinize “current laws and practices in order to determine whether they discriminate against Black voters and other voters of color.”
Kristen Clarke, the first Black woman to serve as assistant attorney general for the Civil Rights Division, outlined a number of features of the law that violate Section 2 prohibitions on discrimination on the basis of race, color, or membership in a language minority group.
Clarke said everything from the timeline under which the bill was passed to targeting voting methods often preferred by Black voters run afoul of the law.
“The House held less than two hours of floor debate on the newly inflated SB 202 before Governor [Brian] Kemp (R) signed into law the same day. These legislative actions occurred at a time when the black population in Georgia continues to steadily increase and after a historic election that saw record voter turnout across the state, particularly for absentee voting, which black voters are now more likely to use than white voters.”
Clarke went on to highlight other problematic provisions in the law, including one “irrationally shortens” the timeline to request an absentee ballot — making it tougher to request a ballot closer to Election Day — and another that cuts the number of drop box locations at which voters may return them.
In the Atlanta area, home to a heavily Black population, the number of drop boxes are expected to fall from 100 to 20.
“The provisions we are challenging reduce access to absentee voting at each step of the process pushing more Black voters to in person voting, where they will be more likely than white voters to confront long lines,” she said, while civic groups would be barred from passing out food and water to those waiting in line.
“This needless ban was passed with unlawful discriminatory intent,” she said.
Georgia Republicans argued the law was needed to protect the integrity of elections. Its swift passage into law followed a loss by former President Trump in the state, followed by claims of election fraud from Trump along with a call from him to Georgia’s secretary of state asking him to “find” the president votes.
“This lawsuit is born out of the lies and misinformation the Biden administration has pushed against Georgia’s Election Integrity Act from the start,” Kemp said in a statement, calling the suit part of a "far-left agenda."
"As Secretary of State, I fought the Obama Justice Department twice to protect the security of our elections - and won. I look forward to going three for three to ensure it’s easy to vote and hard to cheat in Georgia.”
But Clarke and Garland argued the law was not passed in a vacuum.
It also followed historic turnout of Black voters in a state where the GOP lost its stronghold.
A review of pending state legislation from the Brennan Center for Justice found a wave of bills with restrictive voting provisions, warning that the activity is outpacing other years and leaving “the United States is on track to far exceed its most recent period of significant voter suppression.”
Garland pointed to the influx of laws in a plea for Congress to reinstate Section 5 of the Voting Rights Act (VRA), which gave DOJ preclearance power, allowing them to review laws before they took effect in states with a history of voter discrimination.
Georgia laws were often blocked by DOJ until the provision was removed from the VRA by the Supreme Court in the 2013 Shelby Co. v Holder decision.
“The department prevented over 175 proposed election laws across Georgia from being implemented because they failed the statutory test,” Garland said of the preclearance practice.
“If Georgia had still been covered by Section 5, it is likely that SB 202 would never have taken effect. We urge Congress to restore this invaluable tool.”
The suit was announced alongside another initiative from the Justice Department to battle rising threats made against local election officials. A memo from Deputy Attorney General Lisa Monaco establishes a task force across the FBI, as well as DOJ’s criminal division, the civil rights division, and the national security division.
“A threat to any election official, worker, or volunteer is, at bottom, a threat to democracy. We will promptly and vigorously prosecute offenders to protect the rights of American voters, to punish those who engage in this criminal behavior, and to send the unmistakable message that such conduct will not be tolerated,” Monaco wrote in the memo.
National