JBS getting back online after cyberattack 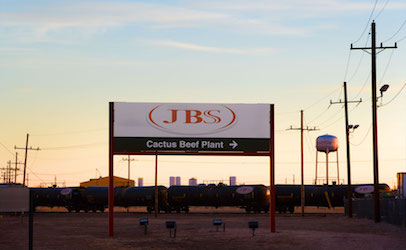 JBS, one of the world’s largest meatpackers, was hit by a cyberattack over the weekend, which forced the shutdown of some of the world’s largest slaughterhouses.
The meat processing company has now resumed most of its production.
JBS announced Sunday some of the servers supporting its North American and Australian IT systems were targeted. Operations in Mexico and the UK were not impacted and are conducting business as normal, according to JBS.
“JBS USA and Pilgrim’s are a critical part of the food supply chain, and we recognize our responsibility to our team members, producers and consumers to resume operations as soon as possible,” said Andre Nogueira, JBS USA CEO. “Our systems are coming back online, and we are not sparing any resources to fight this threat.”
JBS closed beef processing facilities in Utah, Texas, Wisconsin and Nebraska and canceled shifts at plants in Iowa and Colorado on Tuesday.
“The company took immediate action, suspending all of the affected systems, notifying authorities and activating the company’s global network of IT professionals and third-party experts to resolve the situation. The company’s backup servers were not affected, and it is actively working with an incident-response firm to restore its systems, as soon as possible,” said Scott Bennett, American Farm Bureau Federation (AFBF) director of Congressional Relations.
The number of cattle slaughtered in the U.S. fell 22 percent from a week ago, while hogs were down 20 percent, according to USDA estimates.
“It is concerning whenever we see disruptions in our food supply chain. Certainly, the COVID 19 pandemic showed us that last year. We hope the JBS can get up and running as soon as possible. This event has certainly shined a light on how vulnerable even agriculture can be to cybersecurity threats,” Bennett said.
The company is not aware of any evidence at this time that any customer, supplier or employee data has been compromised.
Local