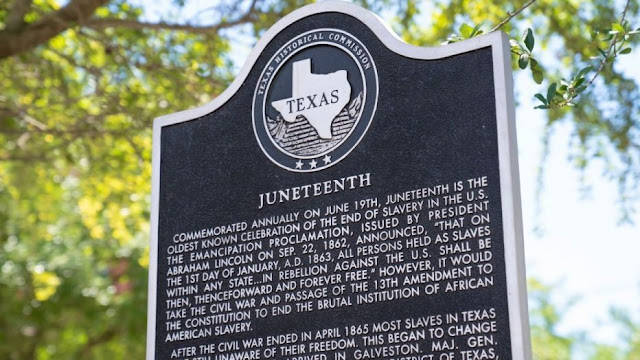 Juneteenth, the oldest known celebration of the end of slavery in America, is finally on the precipice of becoming a federal holiday, as the House on Wednesday passed the Juneteenth National Independence Day Act by a vote of 415-14.
All 14 "no" votes came from Republicans. Two members did not vote.
“What I see here today is racial divide crumbling, being crushed this day under a momentous vote that brings together people who understand the value of freedom,” Rep. Sheila Jackson Lee (D-Texas), the sponsor of the bill, said at a press conference with other lawmakers shortly before the vote.
Multiple Republicans expressed concern during House floor debate that officially calling the holiday Juneteenth National Independence Day could lead to confusion with Independence Day on July 4.
One Republican, Rep. Matt Rosendale (Mont.), said ahead of the vote that making Juneteenth a federal holiday was "an effort by the left to create a day out of whole cloth to celebrate identity politics as part of its larger efforts to make Critical Race Theory the reigning ideology of our country," referring to discussions of systemic racism in schools.
The legislation passed through the Senate with unanimous consent on Tuesday; it now heads to President Biden’s desk to be signed into law.
Juneteenth is a portmanteau of the date that it falls on, June 19. On that day in 1865, Maj. Gen. Gordon Granger of the Union Army issued General Order No. 3 from Galveston, Texas, informing the remaining enslaved people there that they were free.
The House vote operated under a closed rule that was ironed out by the House Rules Committee early Wednesday afternoon in an effort to stop any last-minute bad-faith efforts to stop the legislation from passing.
Juneteenth is getting its day in the sun, as racial justice and equity have dominated national discussion a year after the police murder of George Floyd in Minneapolis sparked a national reckoning with systemic racism and police brutality.
The conversation on how to address prevailing racism and disparities in the country is littered with numerous partisan battle lines, but establishing Juneteenth as a federal holiday has received relatively broad bipartisan support.
Between both the House and Senate, 20 Republicans co-sponsored the legislation, with conservative Sen. John Cornyn (R-Texas) being one of the main proponents.
“There's nothing more powerful than an idea whose time has come,” Cornyn said at the press conference with Jackson Lee.
“It seems to me that this is the most propitious time for us to recognize our history, and to learn from it, and that's the way I regard Juneteenth,” he added.
When the Emancipation Proclamation was put forth by former President Lincoln on Jan. 1, 1863, the Civil War was still in full swing, meaning that the declaration had no agency in states and areas that the Union Army did not control.
And even though the war officially ended on April 9, 1865, it would take Union troops another two months to make their way through Texas, which at the time was the most remote and westward state.
Granger and his troops arrived in the Port of Galveston on June 18, 1865, and a day later, he read the order emancipating all people in the state who were still enslaved.
The 13th Amendment, officially prohibiting slavery in the U.S., wouldn’t be ratified until December of that year.
While just now being recognized as a holiday on a federal level, Juneteenth is celebrated by many cities across the country as well as almost every state.
South Dakota is the only state that hasn’t officially recognized Juneteenth as a holiday.
National