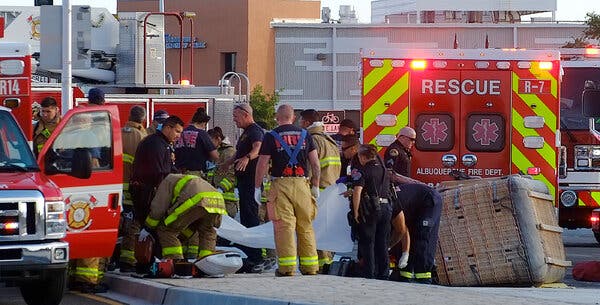 A hot air balloon crashed in Albuquerque, N.M., on Saturday morning, killing four people.
The Cameron 0-120 hot air balloon crashed after hitting power lines six miles from the Albuquerque International Sunport airport, the Federal Aviation Administration (FAA) said in a statement.
The hot air balloon tcrashed into a street and caught on fire, the FAA said.
The crash resulted in the deaths of four people, police spokesman Gilbert Gallegos said, according to the Chicago Tribune.
The identities of the victims have not yet been released, nor has the condition of the person who was injured.
The crash also resulted in 13,000 homes losing power due to the power lines being down, police said.
The FAA and National Transportation Safety Board are investigating the incident along with local authorities.
Gallegos said that although those who fly the hot air balloon are trained professionals, the balloons can be difficult to manage, especially in windy conditions.
“Our balloonists tend to be very much experts at navigating, but sometimes we have these types of tragic accidents,” he said.
Albuquerque is known for its hot air balloon rides, as it holds a hot air balloon festival that thousands of people travel to see every year.
Local