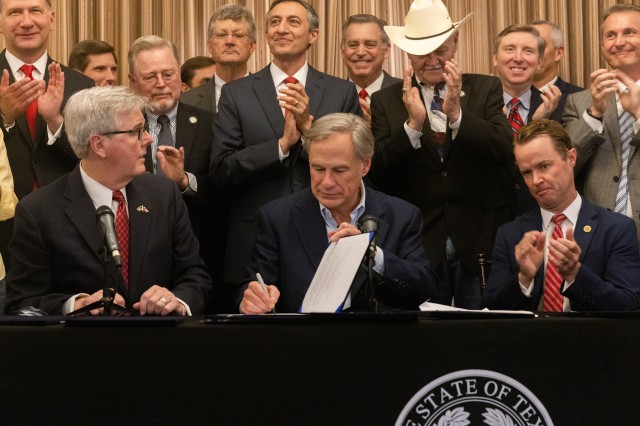 By Bethany Blankley
Gov. Greg Abbott signed seven Second Amendment bills Thursday, making Texas the 21st state to legalize open carry of a firearm.
“We are on hallowed ground,” Abbott said ahead of signing the measures at the Alamo Hall in San Antonio. “We are gathered today in what is considered to be the cradle of liberty in the Lone Star state,” he said, where people fought and died for Texas independence. The same principle they fought for, he said, applies today.
“There is a need for people to have a weapon for people to defend themselves in the Lone Star State,” he added. “We are pushing back against this narrative from the federal level to the local level that says the government is coming to take your guns. Texas will not let that happen.”
The governor signed Senate Bills 19, 20, and 550, and House Bills 957, 1500, 1927, and 2622 into law. They all become effective Sept. 1.
Abbott first signed HB 1927 legalizing open carry, or Constitutional Carry, into law. Texas is now the 21st state to adopt a constitutional carry law. In constitutional carry states, residents can legally carry a firearm without a license or any other government-applied restriction, ConcealedCarryStates.org explains. Seven states have laws prohibiting it, according to ConcealedCarry.com.
Abbott also signed a bill making Texas a Second Amendment sanctuary state, “shielding Texas from overreaching federal government law.”
He also signed a bill to prevent any local government from prohibiting the sale of guns or ammunition during a declared disaster, and another prohibiting any government entity from contracting with businesses that discriminate against firearm supporters like the NRA.
Another bill eliminated the shoulder or belt holster requirement, allowing Texans to carry their weapon in whatever kind of holster they choose, and another allows travelers coming to Texas to store firearms in their hotel rooms. The seventh bill protects any firearm suppressor made in Texas from being subject to federal law or regulations.
“Texas now joins a growing number of states in upholding its citizens’ constitutionally protected rights while understanding that responsibly-armed citizens can make our communities safer,” U.S. Concealed Carry Association President and Founder Tim Schmidt said in a statement. “Today, the USCCA remains dedicated to educating Americans on firearm safety and their Constitutional right to carry a gun. However, we believe the requirement to be responsible with a firearm is not linked directly to a permit. In reality, the requirement to be responsible is never-ending, and we encourage all responsible gun owners to make safety and training a priority in Texas and across the nation.”
The USCCA has seen an increased demand for firearm safety and training courses as millions of new gun owners across the country are taking the responsibility of their safety into their own hands, it reports. The association now has almost 600,000 members, including over 47,200 in Texas and growing, and has experienced exponential growth in education and training over the last year. In 2020 alone, over 2,000 new USCCA instructors joined the ranks of 10,000 instructors nationwide, it said.
Texas